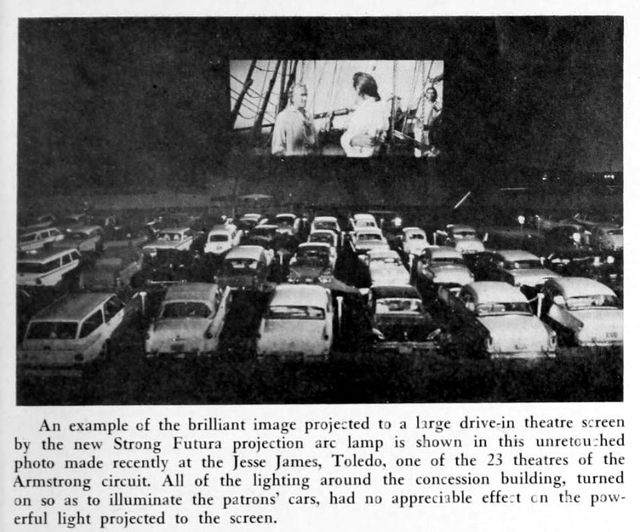 The Jesse James Drive-In opened on June 4, 1953 with Gary Cooper in “Springfield Rifle” and Betty Hutton in “Somebody Loves Me”. It was built by Jesse James Enterprises whose partners were Harold James (a Toledo attorney), Jack Armstrong (of the Jack Armstrong circuit) and Ernest Walters from North Baltimore, Ohio. The name Jesse James Drive-In came from Harold James’s nickname which was Jesse. The grand opening featured free balloons, coffee & doughnuts, pony rides, plus the first 5,000 cars were entitled to a free Alemite grease job for their cars. The drive-in had a screen the size of 100 feet x 50 feet, with a capacity for 1,100 cars which covered 47 acres of land. They also hosted the Lutheran Men’s League of Greater Toledo for Sunday church services.

Drive-ins were changing over the years, along with peoples' taste in movies, which is why James decided to close the theatre. They were showing more risque/violent movies toward the end and he was considered to be a pretty conservative person by 1980’s standards. Since he was the last sole surviving partner of the Jesse James Enterprises, he decided to close it and sell the land.

On October 10, 1980, the last movies that played were “The Warriors” and American Gigolo". The neon marquee was shut off for good. In 1981, the property was sold and the Jesse James Drive-In was demolished and re-zoned for commercial use. The Jesse James Plaza strip mall and Willowbrook Place, which is a mobile home park, were built on the site. James was pleased when the strip mall was going to be called the Jesse James Plaza. When you discuss drive-in theatres in Toledo, OH, the Jesse James Drive-In always comes up in the conversation with its iconic neon marquee with the cowboy riding the horse on it.

My Mom worked at the Jesse James, what wonderful memories :)

Saw many a movie there as a kid…always thought that they had the best kiddie playground. Remember…“the show will start in five minutes…!

I worked at the Jesse James concession stand for 3 years in the ‘70s. We wore black jeans, red western shirts and bolo ties. We definitely went with the western theme. We had great fireworks for the 3rd and 4th of July. The drive in was always filled to capacity for that holiday. We had to turn cars away. Lots of great memories from working there for sure.

Maybe somebody who saw Mutiny on the Bounty at the Jesse James Drive-In will recognize their car in the nocturnal photo that appears on this page of the October, 1963, issue of International Projectionist. (Click on the + sign in the toolbar at the lower right of the page to enlarge the image.)

Thanks Joe Vogel for the link!!! I just added the pictures.

The premiere Toledo-area drive-in at one time. Always clean, and oriented towards families. Very good concession stand and the projection was the best in town. Unfortunately…one of the ugliest strip malls you’ve ever seen and a massive, crappy trailer park now squat on the site. A shame.

I see the strip mall also has a strip club. Very appropriate.