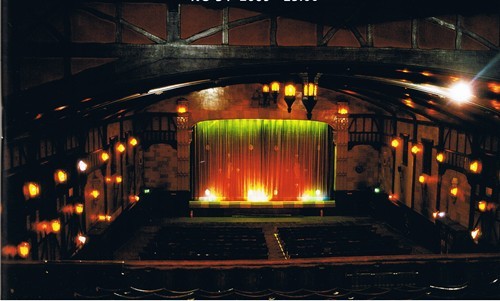 Located at the corner of Coleshill Road and Stechford Lane in the Ward End district east of Birmingham. The Beaufort Cinema was opened on 4th August 1929 with Matheson Lang in "The Triumph of the Scarlet Pimpernel" and a seating capacity for 1,200. It had a magnificent Tudor style interior. There was a real Oak wood staircase up to the balcony seating area, and many beautiful stained glass windows in the foyer which depicted Kings & Queens of England. It was equipped with a Compton 2Manual/8Ranks organ, which was opened by organist J.I. Taylor. The projection box was located in the rear stalls, under the balcony.

In 1937, the cinema was enlarged by extending at the screen end, and it now had a 35 feet wide proscenium. The Compton organ was removed at this time and was installed at the EMI recording studios at Abbey Road, St. John’s Wood, London. The Beaufort Cinema re-opened on 18th September 1937 with “Madeleine Carroll in "The Case Against Mrs. Ames” and Frances Farmer in “Border Flight”. It had a new seating capacity for 1,584.

Always independently operated, the Beaufort Cinema was closed on 19th August 1978 with Doug McClure in "Warlords of Atlantis" and Terence Hill in "Watch Out We’re Mad". There were hopes that the cinema could be designated a ‘Listed’ building, but the powers that be at that time deemed it’s interior as fake, and not real Tudor, and listing was refused. Sadly, the Beaufort Cinema was demolished and a B&Q hardware store was built on the site, which in 2009 is an Aldi supermarket.

Great intro as always Ken, interesting story of the organ being installed in the EMI studios,I wonder if it is still there and how many artists have used it in their recordings?

This organ saw a great deal of use at Abbey Road particularly accompanying other artistes. If you go to http://theatreorgans.com/southerncross/radiogram/ukfiles.htm there are some recordings of it in a solo capacity. It is now being installed in a private venue in Norfolk.

This should read “this is where Lawrence Wilson took Linda Dugmore on their first date” Sad to see so many classic cinemas demolished. None of the new ones have the same atmosphere.

The organ went from Abbeyroad to a house in St Austell,Cornwall where it was installed and playing.The owner also had the largest Christie theatre organ from the Regal Marble Arch.This was never reassebled and was poorly stored.He also had a Wurlitzer.That didnt even make it off the truck it was collected in.The Compton was removed and reinstalled in a residence in Norfolk.

So, refused Listing because of the ‘fake’ Tudor interior… you’ve got to wonder about those who make decisions regarding Listing… surely that was the whole point of it’s interior? Was the same said of the ‘fake’ interior of the Granada, Tooting in London? I think not!! Complete muppetry.