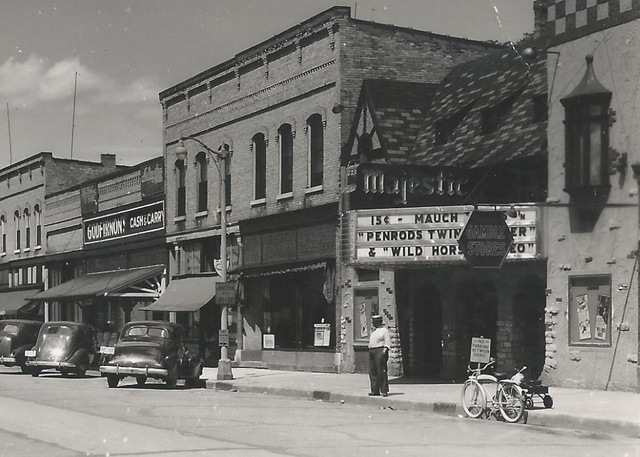 The Majestic Theatre was located on S. Broadway just south of George Street. It was open in 1930 with seating listed at 300.

The 300-seat Majestic and the 400-seat Pearl were the only theaters listed for De Pere in the 1927 Film Daily Yearbook. By 1935, the Majestic was being listed with 450 seats.

The picturesque, cottage-like front the Majestic Theatre has in the old photo has been removed from the building, but I believe that part of the theater is still standing. It now has the address 121 over the door of the totally modernized front, but there is a setback above the entrance, beyond which you can see what was probably the end wall of the auditorium.

In the vintage photo, the end wall, which then had a checkerboard pattern, was taller than it is in modern street view. This makes me suspect that the change in seating capacity from 300 in the late 1920s to 450 by the mid-1930s might have been accomplished by extending the auditorium upward and installing a balcony. The upper part of the auditorium must have been removed, along with the picturesque front, when the building was converted to retail use.