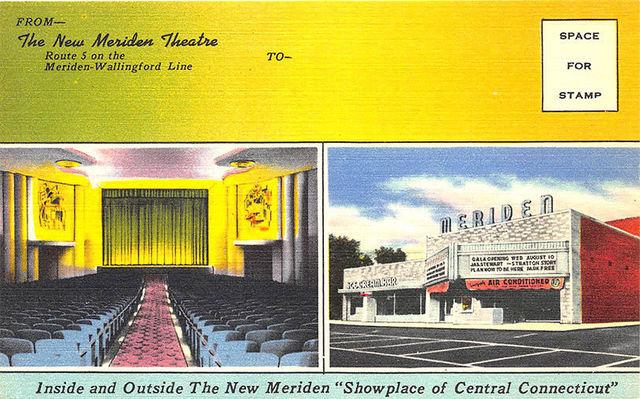 The theatre was converted into a 2 screen in the late-1970’s.

Located on the top of the hill on route 5 in Meriden (on the Wallingford town line), the theatre sat across from the International Silver Building. It closed on April 3, 1988 and was demolished later in 1988 to make way for the Town Line Square shopping plaza.

Contributed by "The Hoodlum"
Get Movie Tickets & Showtimes

What a shame this place is gone. It was fabulous! Wasn’t art deco, though. Art moderne is a more appropriate description. Prior to its conversion to a “twin,” the screen was enormous. It was on this huge screen I saw 2001 A Space Oddysey, the Blue Max, the Ten Commandments, Ben Hur, and other such wide-screen epics. The theater’s ceiling featured recessed neon red lighting behind a scalloped effect, cove lighting in the inner lobby, hidden red lighting on the walkway behind the auditoriam, and a “cry room” on the 2nd floor. Meriden lost its most beautiful theater when it allowed this to be demolished.

The name of this theater, as listed in Cinema Treasures, should be CHANGED to read simply, “Meriden Theater.” The “twin” feature came in its latter days, as the owner attempted to compete with the mega-movieplexes by cutting the wonderful auditorium in half. It was a cheap, crass move. The “wall” between the two separate theaters was little more than painted cinderblock, and there wasn’t the slightest effort to soundproof it. Seating was unchanged and, as it was originally designed to focus on the single stage/screen, resulted in many of seats facing AWAY from the two separate auditorium screens. The result was a horrible moviegoing experience.

An article about the Meriden Theatre appeared in Boxoffice Magazine, October 8, 1949. It credited architect Mendel Baldessari of New Britain with the design. The new, independently-operated house opened with 928 seats.

An Internet search shows several results for an architect named Mendel Baldessari still practicing in New Britain. If it’s the same architect he must be at least in his eighties, but perhaps it is a son.

March 24 1970 and the adult hit “BOB,CAROL,TED,ALICE” is playing along with a short called “A PLACE TO STAND”.

In 1972 when I was nine years old my mother took me to see The Poseidon Adventure here. After the movie while walking to the car, I spotted on ground a red, marquee letter “W“. We looked up to the outside marquee sign and it read Shelly _inters. My mother said she didn’t think they’d mind if I took it as a souvenir (I probably would’ve told my own kids to bring it back). That “W” hung upside down in my bedroom for as long as I can remember. Since my last name starts with an “M” we flip it. Unfortunately, through the many moves in my life, I lost the letter years ago.

On June 5, 1954, Billboard reported that the Meriden’s owners were building a drive-in in back. “A new $125,000 drive-in with capacity for 815 cars, now being erected at Meriden, Conn., will have a screen measuring 120 feet wide. Nick Kounaris and Paul Tolis, partners in Kounaris and Tolis Theaters, are building the project in the rear of their first-run Meriden Theater. July completion is planned.”

MichaelKilgore:The Theatre Catalog for 1955 and Film Daily Yearbooks 1955 thru 1957 have no listing for a drive-in theatre in Meriden.

Hi Ken. Thanks for mentioning your sources to spare me from checking. I didn’t see any Meriden drive-ins in any of the Motion Picture Almanacs that I checked. Although other Billboard notes I’ve read have checked out okay, I don’t especially endorse this one. Although I found a follow-up note in the July 24 Billboard: “An August 1 opening is planned for the drive-in being built at Meriden, Conn., by Nick Kounaris and Paul Tolis. Car capacity has been increased from original figure of 815 to 900, with screen to measure over 100 feet wide. Construction cost is estimated at $150,000.”

IF you believe these notes, this drive-in wasn’t just planned, it was actively under construction and within weeks of opening. A 1966 aerial photo shows that a former orchard (as of a 1950 aerial) behind the theater had become cleared land, but that weak hint is the only other indication I’ve seen that there was ever a drive-in being built on that site.

It’s likely that Something Happened, and the full account of that Something could make a fun anecdote in the story of the Showplace of Central Connecticut. I hope that Billboard’s short note is a springboard for historical research some day.

The beginning of the journey was reported in the Hartford Courant, Aug. 16, 1953: “Permit for (a) drive-in movie is sought by Apostalias Tolis and Nick Kounaris, owners and operators of the Meriden Theater, built about four years ago … The owners plan a novel operation in that the drive-in will be adjacent to the enclosed theater, and the same program will be shown simultaneously on both screens. In case of rain or snow, the owners would permit the audience in the outdoors entrance to the enclosed theater.”

Probably the end of the line showed up in Billboard, Oct. 2, 1954: “Nick Kounaris and Paul Tolis, partners in the Kounaris and Tolis Connecticut Theaters, have postponed opening of their $150,000, 950-car capacity Meriden (Conn.) Drive-In Theater until spring. The screen will measure 114 feet wide. Construction is currently under way.”