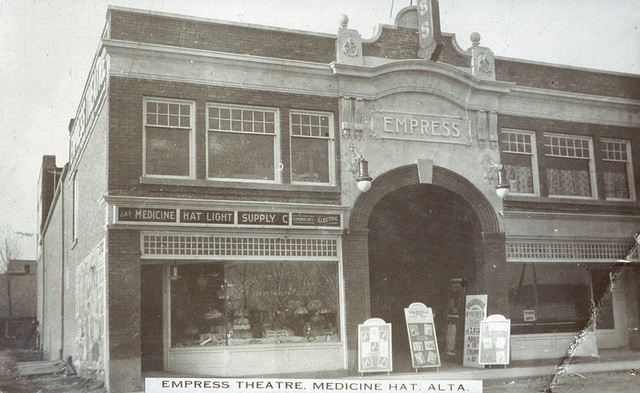 The Empress Theatre was one of the earlier theatres in Medicine Hat. It was owned by Famous Players, seating 625 and was opened on June 16, 1913.

The theatre closed in 1945 and has since been demolished.

The Empress Theatre in Medicine Hat was part of a circuit which was the subject of this item from the July 6, 1912 issue of Moving Picture World“

"K. J. McRae, one of the owners of the Empress Theater Circuit, in MacLeod and Medicine Hat, Alberta, and Vernon and Kamloops, B. C, was a visitor at the World office last week. He stated that his company will open up new houses in Nelson and Revelstoke, B. C, in August. Straight picture programs are run in nearly all these new houses, which have an average capacity of 550 people, some of them seating as many as 750. Good traveling dramatic attractions are shown in these theaters when they chance that way. Three reels of pictures constitute a program in any of the houses, and the admission is from 15 to 25 cents. A four-piece orchestra, with good spotlight singers, are also used. Two presentations in the afternoon and two at night are given. The best people are catered to and well-selected Licensed or Independent programs are used, according to the location of the town. The Western houses are booked from Vancouver, B. C, and the Eastern from Winnipeg. Mr. McRae stated that all the picture theaters in the Dominion of Canada, west of Winnipeg, are high-class structures. Mr. McRae spoke highly of the World and stated that every house on the circuit was a subscriber.”