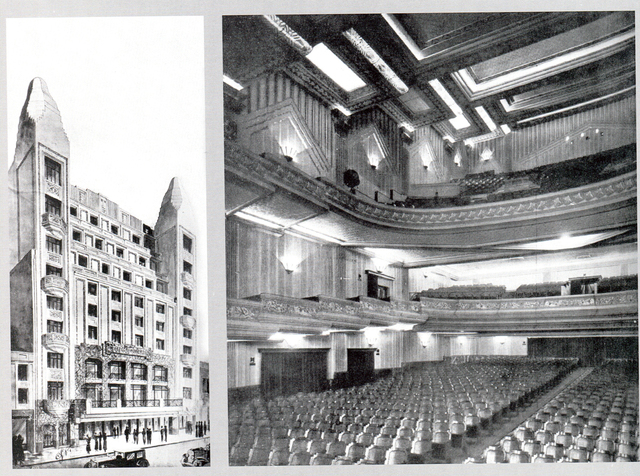 Located at the junction of Lavalle and Esmeralda. The Cine-Teatro Monumental was opened on 23rd May 1931 with "Cuatro Legionarios" (Four Legionaires).

The theatre is fronted by a seven storey office building, with flanking square spires. Inside the cinema, the splendid Art Deco style assisted in the Cine Monumental being christened ‘The Cathedral of Cinema in Argentina’, and for over 40 years, it was the principle cinema in the country. Seating in the 2,300 capacity auditorium was located in orchestra, mezzanine and balcony levels, with side slips along the side-walls which also contained seating. Projection was from the projection booth at the rear of the balcony. During World War II, due to difficulty in obtaining films, the Cine-Teatro Monumental was used mainly as a live theatre. Reverting back to films, the Cine Monumental was sub-divided into four screens in 1972. It was closed in 1991.

It remained shuttered until 11th June 2001, when under new owners, it was re-furbished and re-opened.

The entrance, photographed in June 2010:
View link
Street scene, beside the entrance. Obviously, it would be impossible to photograph the 7-storey building in such a narrow street:
View link