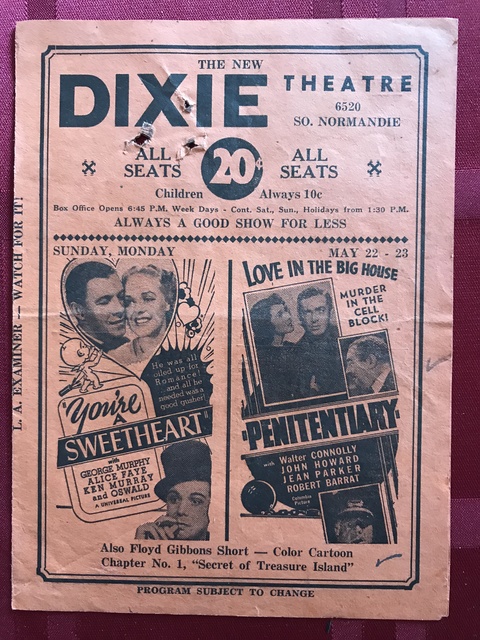 The Dixie Theatre was opened prior to May 1938. It continued to operate into the 1950’s.

Not demolished. It is a church now. Status should be closed.

You can see the side of the building to the left of this 1932 photo. Unfortunately the photographer focused on the water and not on the front of the theater:
http://tinyurl.com/2awu4c

Of course, if the photographer was facing west instead of east, this wouldn’t be the theater at all.

Ken: I think the photographer must have been facing west. Your photos of the theatre show a two story building rather than the one story building in the flood photo.

In any case, this remarkably rare (and probably unique in Los Angeles) Southern Greek Revival style theatre building was erected in 1920. The rarity of the style for theatres is one of the things that led me to suspect that the building did not begin life as a theatre. There’s also the fact that, as can be seen in Ken’s photo of the side of the building there are windows which were obviously original to the building.

In the L.A. library’s California Index I found two cards which may shed light on the history of this building. The first references a 1931 city directory which places the Epworth Methodist Church at the northeast corner of Normandie Avenue and 65th Street (the actual location of the Dixie Theatre, despite its address of 6520 S. Normandie which would suggest a location south of the intersection.) The second references an article in a 1938 issue of Southwest Builder & Contractor which reveals that Epworth Methodist Church intended to build a new building at Normandie and 65th.

A TerraServer of Google Satellite Image search on 6520 S. Normandie will show the intersection with the old church/Dixie Theatre building on the northeast corner, and another, larger church building on the northwest corner, presumably the 1938 replacement. So, it looks as though the Dixie Theatre building began life as a church in 1920, operated as a movie house for a while after 1939 or so, and then was converted back into a church no later than 1980, according to the plaque on the building now.

The building on the northwest corner is larger and equally interesting architecturally. It’s in bad shape now, essentially abandoned. I imagine it will be demolished soon. I can take a picture of it if anyone’s interested.

The Dixie theater was located on the Northeast corner of Normandy and 65th Place. Epworth methodist church was on the northwest corner of Normandy and 65th place. There was a vacant lot on the southwest corner until around 1950. Then miller’s market moved from its previous location on 67th and normandy and built a new market there. The Dixie sat empty for a while and was converted to a church around 1952 0r 1953. It was call the Zion temple of the the Apostelic faith. I lived at 1414 w. 65th pl from 1944 until 1954 and was directly across the street from Epworth. Camino Jack

The Dixie was part of the independent theater lineup in March 1947, from the LA Times:
http://tinyurl.com/m63pb3

I posted a flyer I found for the Dixie Theater from the 30’s. This and several others were in an old box in storage. My mom grew up at 1414 West 65th Street and went to that theater a lot.
Camino Jack- you must have lived right across the street from the Mogel’s?