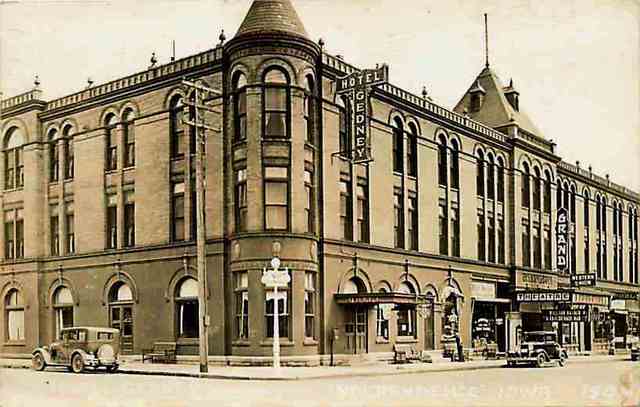 The Gedney Opera House was opened August 23, 1892 and was part of the Hotel Gedney. It later became the Grand Theatre showing movies. The Grand Theatre and Gedney Hotel were destroyed by fire on March 3, 1945. The Malek Theatre was built on the site in 1947.

The theater in this Romanesque Revival building was originally called the Gedney Opera House, according to this web page form the Buchanan County Historical Society. The Gedney Opera House was listed in various editions of Julius Cahn’s Theatrical Guide. The Guide gave the seating capacity of this ground floor house as 850.

A History of Buchanan County published in 1914 says that the Gedney Hotel and Opera House were built in 1892, and that the project was designed by Chicago architect G.W. Sunderland. The Opera House opened on August 23, 1892, with a performance of Auber’s opera “Fra Diavolo,” presented by the Andrews Opera Company.

The historical society web site says that the Grand Theatre and Gedney Hotel block burned to the ground on March 3, 1945. The Malek Theatre was subsequently built on the site.

The March 10th 1945 issue of BOXOFFICE magazine (available at several sources online) has a detailed account of the fire on page 75.