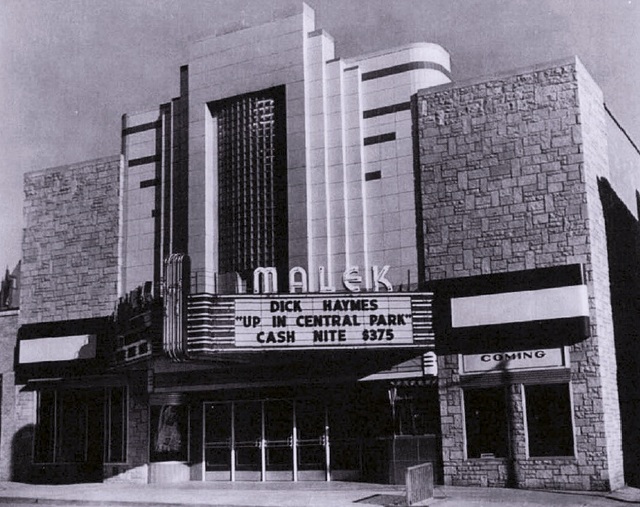 The Malek Theater opened on October 29, 1946 on land previously occupied by the Grand Theater, and was constructed in the still popular style of the age Streamline Moderne. The Malek Theater was part of what was known as the Gedney Block, which contained a theater and a grand hotel called the Gedney Hotel, which was a getaway for wealthy patrons who came from larger cities to gamble at a local carriage-horse race park named the Allerton-Axtel Barn.

The Grand Theater had burned to the ground in the 1940’s and its owner, Bob Malek, decided to build a new theater and named it, aptly, the Malek Theater. The new theater was the patron’s dream for that era, containing two rooms for private viewings, each with doors and thick paned glass to eliminate sound in or out. The theater also came equipped with both a crying room and a party room, in which reservations were made for private party viewings.

In its prime, the Malek Theater was considered a performance theater, not a movie house. But in 1985, the managers decided that business could be improved if the theater was split into a 300-seat twinned theater instead of the original large 1,200-seat auditorium. The Malek Theater switched to a movies-only format and suffered. The results were so disastrous they prompted a legal dispute and great disappointment for the theater’s patrons.

In 1993, Anthony Fitz and his mother purchased the business and closed the theater to determine what to do next with the Malek Theater. According to Fitz, the theater was closed due to its reputation of no one caring, and I started to take a look around. I noticed a lot of interesting discoveries in architecture and paint underneath its commercial face, and really dedicated myself in research of the Malek Theater. The original builder and proprietor, Bob Malek (recently deceased), was very happy to come down to the Malek Theater, and tell me all about it. I was very intoxicated by his stories and one thing that will always stick with me is when he started to cry. He had told me he had named the Malek after his father who was ill during construction, and had passed on before it was complete, and never was able to witness its beauty in bloom.

Since Mr. Bob Malek has passed, I have done all of the restoration myself, apart from a few friends' occasional help. Because of the visits from Mr. Bob Malek. he has opened my eyes to graciously appreciate the Malek Theater’s true beauty in design, art, and lustre, it will provide with nothing mainly but tlc and creativity. The Malek Theater is one [of a kind], with its neon indirect lighting, artistic interior scroll painted accents, and its personal touch. I am hoping everybody entering can appreciate it for being designed for them to enjoy, not for us to become fat and rich.

Google does not recognize Chatham Street in Independence. Can anyone confirm the address of this theater?

The October 26, 1946, issue of Boxoffice Magazine said that the opening of the Malek Theatre had been set for Tuesday evening, October 29. The article reported the seating capacity of the new house as 825.

The destruction of the Grand Theatre and Gedney Hotel by fire was reported in the March 10, 1945, issue of Boxoffice Magazine. The Grand, formerly the Gedney Opera House, had approximately 580 seats, according to the Boxoffice article.

The July 31, 1978, issue of Boxoffice said that the Malek Theatre had been bought by Dennis Voy and Gerald Peterson, who intended to convert it to a twin.

The Malek is finally listed in the Historical Society of Iowa, and the National Register of Historic places. I worked hard in getting this done, and have been serious through this whole trying to get the Malek back to life! The city of Independence has not been supportive at all in this, I believe they thought I was just playing down there, but I was trying to keep it maintained with what little funds I had, while trying to work and support my family. Since I started, another movie cinema has been built and it really was a devastating blow to our hopes and dreams of bringing life back into our beautiful historic downtown, I thought having a brilliant display of neon on the marquee would have been a great attraction! We wanted our place to entertain Independence and help with community events and house shows that would enlighten the crowds! Now, the time for everyone to be serious and get involved instead of getting inquisitive has come. there is no doubt this theater is a huge part of Independence’s heritage, and people need to be helpful so there can be something other than a big piece of crap sitting and rotting away as they drive/walk past it wondering what is going to happen with the theater. Indee knows how to contact me, let’s get real and make something happen!

Here is another photo:
http://tinyurl.com/277js5s

The National Register of Historic Places confirms that the Malek Theatre was designed by the Des Moines architectural firm of Wetherell & Harrison.