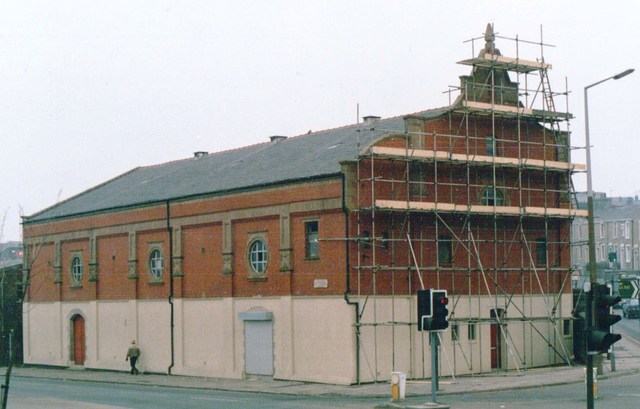 Located in the Ewood district of Blackburn at the corner of Aquaduct Road and Bolton Road. The Empire Electric Theatre was opened on 23rd February 1910 and seated 800. It had a 20 feet wide proscenium. When CinemaScope was installed in 1954, the proscenium was altered to fit a 24 feet wide screen.

In October 1957, it was taken over by the Newcastle upon Tyne based Essoldo Cinemas chain and was re-named Essoldo Ewood. The Classic Cinemas chain took over Essoldo Cinemas in 1972 and it was re-named Classic and closed in September 1972 on regualar films, and was leased out to the local Asian community and operated as an Indian cinema screening Bollywood films. In 1976, Classic Cinemas modernised the interior and operated regualar films again on Sunday’s to Wednesdays, while Indian films were screened on Thursdays-Saturdays.

A local theatre group became interesting in purchasing the building, and it became the Red Brick Theatre. In October 2002 it had become Thwaites Empire Theatre, presenting live theatre performances. Remodeled in November 2005, a balcony was added to the seating area, which now has a total of 320 seats.

An old photo of this theatre: http://tinyurl.com/4djq68s