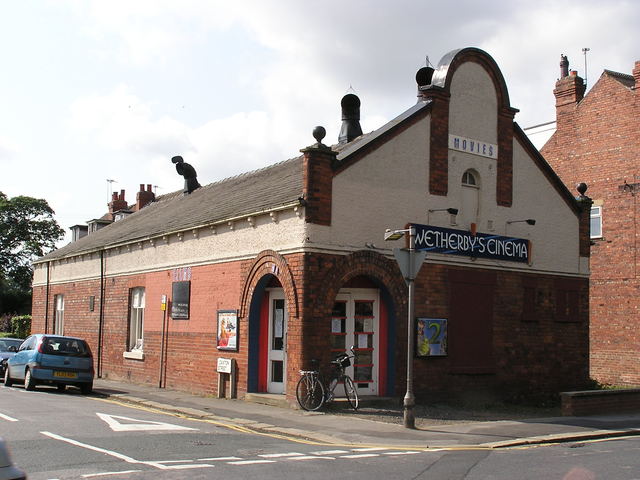 The diminutive Wetherby Film Theatre in Caxton Road screened its first film back in 1915 when it known as the Raby Picture House. At this time it accommodated 500 patrons.

It had an uneventful life and was acquired by the Star Cinemas chain in the late 1940’s and they renamed it the Rodney Cinema. The seating capacity was now reduced to 260. In the early part of the 1960’s bingo was introduced part time but this was not enough to save the Rodney Cinema and it closed on 25th April 1964 with Frank Sinatra & Dean Martin in “4 for Texas” and Paul Maxwell in “Shadow of Fear”. Some years later bingo re-opened it and lasted until 1993 when the building was again shuttered.

However I am pleased to report that the cinema has now returned to its original purpose and films are screened every evening here.

It reopened with 156 seats in July 1994 and each year sees more refurbishment and updating. Audiences have responded and each year increased admissions are recorded. A new entrance has been made around the corner in Crossley Road.

Another photograph of the Weatherby Film Theatre:
View link

And another showing more of the long side of the building here:

As a five year old, I was taken in a school party to the Rodney one afternoon in 1953 to see “A Queen is Crowned”. Last visited in 1964 to see “Tom Jones” at which time the cinema still had a relatively large screen (CinemaScope looked particularly good there)and plain brown screen curtains lit by two ceiling mounted pageant lanterns.

A Piece of Cinema Trivia. “Rodney Cinema” is named after a son of Walter Eckart. the owner of Star Cinema.. Rodney and his Brother (Who at the moment I cannot remember his name) Took over the Star Group)