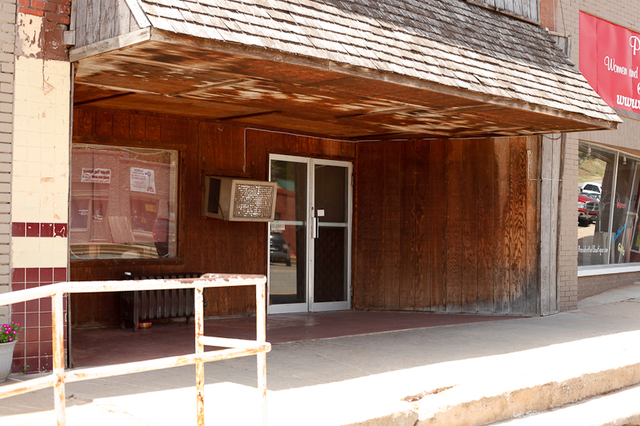 Visited here today and was able to locate a building that was obviously a theater. The business on the left is 208 W. Main and the building on the right is 214 W. Main., so that it would have to be 210 or 212 W. Main Street. The building has wood paneling covering the original facade. The ticket booth has been removed, but you can still see its outline on the concrete. It appears as though it probably had a red/white tile design on the lower half of the building.

The Binger Opera House was built by operators Frank Marvel and Reinhart Lossan. It launched in 1906 with live events. It experimented with movies and on February 3, 1920 its name was changed to the Binger Theatre going with full-time movies and Erich von Stroheim’s “Blind Husband.”

New operators took on the venue changing its name to Ranora Theatre on May 5, 1925 with Mrs. Wallace Reid in “Human Wreckage.” It appears to have ceased operations following the September 29, 1927 screenings of “Pigs.” R.C. Rosser then sold the Ranora to Mr. R.V. Meecham. He took over and changed the name to the Amusu Theatre beginning with the October 7, 1927 showings of Milton Sills in “Men of Steel.”

The Amusu made the transition to sound to remain viable when it installed Movietone sound to play “King of Kings” on December 9, 1929. Meecham sold the venue to Mr. and Mrs. H.D. Cox in the 1930s and they reverted back to the Binger Theater nameplate.

But in January of 1947, the theatre was destroyed by fire despite the news story that stated “all of Binger’s 800 citizens fought side-by-side with firemen to extinguish a recent blaze which razed two buildings on Main Street and threatened the entire town. The Binger Theater was destroyed in the fire.”

Operators Mr. and Mrs. H. D. Cox would build a new theatre that was going to be the New Binger Theatre at least in concept stages. However, when the new theatre launched, it was called the Caddo Theatre. The Caddo opened on October 6, 1946 with “The Big Sleep.”