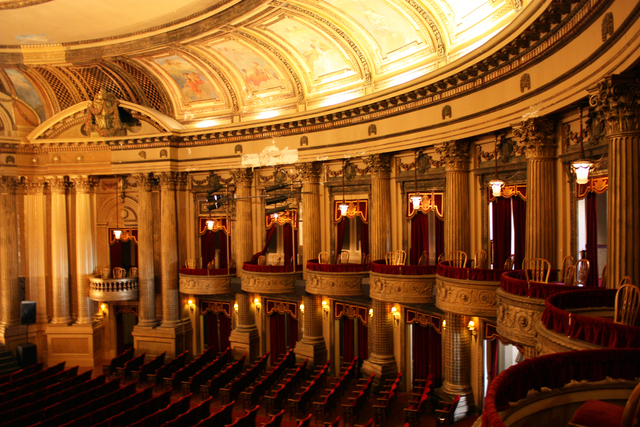 The 830-seat Al. Ringling Theatre was the grandest theatre ever built in Baraboo, which had a few smaller theatres up to that point.

It was built by circus showman Al. Ringling (of the Ringling Brothers) as a gift back to the town in which he grew up and loved. He hired Chicago architectural firm Rapp & Rapp, best known for their Chicago Theatre, to design his playhouse.

Built in French Renaissance style, the Al. Ringling Theatre is as ornate as any European opera house, complete with gilded plasterwork, frescoes and mosaics and antique tapestries. The Al. Ringling Theatre opened on November 17, 1915 to operatic performances, but soon became known for vaudeville and later motion pictures.

Amazingly, the theatre has remained almost completely intact over the years, despite some 1970’s renovations made with the best intentions that were corrected in the 1990’s. The theatre continues to mainly screen movies, but is also used for live shows, concerts and community gatherings.

What a beautiful theatre! I am glad it is being maintained so well.

Lost Memory: Your “another angle” photo is spectacular! Thanks for sharing…again!

If ever there was a theatre entrance, this is it with the famous name high above…..Al Ringling! A must-see, in person, someday!

The Al Ringling theater, “America’s Prettiest Playhouse” since 1915, has been sold with its sister theater, the Juliar, to a new Milwaukee corporation, Baraboo Theaters, Inc., by Henry E. Ringllng.
Purchase price for the theaters was announced at more than $150,000. The Al Ringling theater, when it was completed in 1915, cost $100,000.
The corporation which bought the theaters also operates theaters in Richland Center, Boscobel, Elroy, and Black River Falls. It is headed by Jacob Eskin, president of the Eskin Theater Management Co., Milwaukee.
The Al Ringling theater was built by Albert Ringling, an owner of the Ringling Brothers circus. It seats 834, and at the time it was built was one of the largest and finest theaters in a city of its size in the country.
The Juliar, a much smaller theater, was completed in 1938 by Henry E. Ringling, in memory of Mrs. Selome Juliar Ringling, mother of the Ringling brothers.
The Al Ringling theatre originally was built for legitimate theatre, or as an “opera house.” It was converted to a movie theater later. It is still used for area theatrical performances.
Famous actors who have visited the theater during the time it was an opera house include Lionel Barrymore and Charlotte Greenwood.
Henry E. Ringling, Wisconsin Republican national committeeman, was in Washington for the inauguration Thursday and could not be reached for comment.

Just for accuracy’s sake, officially the theatre’s name has a period after the name ‘Al’.

Tom McEvilly, the new CEO at the Al. Ringling Theatre, wants to involve the Baraboo community with new programs and shows. “These theaters don’t exist anymore, they’re made into parking lots, they’re made into multiplexes or they’re like antique malls,” said McEvilly. “I’m really glad that this community was wise enough and dedicated enough and passionate enough to save it.” He plans to introduce youth theater classes including orientation and acting courses taught by theater professionals, and students will perform two shows a year. McEvilly says he plans to teach a couple of classes as well.

“You need to create that beginning base where they appreciate what we have, and they want to have the same passion to keep this place alive,” said McEvilly. “In our theater here, we have the high school and our parochial schools and our dance studios from the area that come and perform here. And when they come and have that opportunity here, they carry that love for this place throughout their entire lives.”

McEvilly looks forward to bringing many shows to the theater in the coming year, including live music performances, dance companies and comedic events that all generations can enjoy. Al. Ringling Theater Board President Aural Umhoefer said McEvilly’s theater experience will help secure the future of the historic playhouse. “He’s very experienced, so he’s very good to work with, he knows how to manage all aspects of a theater, which will benefit the Al. in the future.”

Throughout October, the theater will host a variety of live events, with Pink Droyd, a Pink Floyd cover band performing Saturday, and Charlie Berenes from Manitowoc Minute on Oct. 26. At the end of October and beginning of November, a theater guild that has performed in the theater for almost 60 years will be perform the musical “Pippin.” The theater also will host comedic acts such as VODville, a group of Hollywood actors to recreate original slapstick comedy similar to the Three Stooges and Charlie Chaplin. The theater also will present an original version of “Saturday Night Live” with local actors in the comedic sketches.

McEvilly said theater has directed theater productions in Madison, Chicago and Germany, and written three musicals. Until recently he was a theater and communications professor at the University of Wisconsin-Platteville Baraboo Sauk County. He also served as the youth theater director at Portage Center for the Arts from 2015 to 2017 and holds six degrees from UW-Madison, including a doctorate in education administration with a focus in fine arts administration and fundraising. He also worked as a teacher of theater with gifted and special needs students.