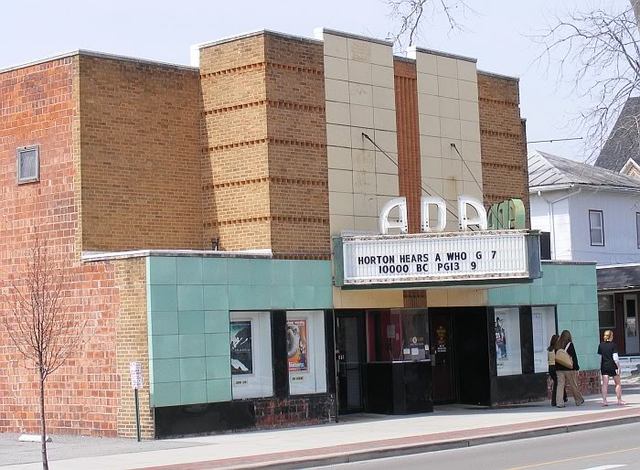 The Ada Theatre was built in 1938, in Streamline Moderne style, and its decor included intricately designed plasterwork on the auditorium walls and ceiling, and a simple but elegant triangular marquee which spelled the theater’s name in bright red letters. A few years after opening, the original decor was lost to a new color scheme of orange and black, the colors of the nearby Ohio Northern University.

One of the Ada’s first owners was Charlie Hawk, who ran the theater for almost 40 years. It’s said that his ghost still roams the theater, and has been seen several times peering out of the window of the projection booth.

After Mr. Hawk’s death, the theater changed ownership a couple more times, before closing its doors in 1983. When Rodney and Becky Miller first toured the Ada Theatre in 1986, it was in near-ruinous state. Its interior was partially open to the elements, with holes all over the roof, and nearly everything inside had either been removed or destroyed except for the seats, which were in terrible shape. However, the Millers felt that the old Ada Theatre could still be brought back to life, but it would take a lot of money, time, and effort to do so.

The theater required a new roof, new electrical wiring, new plumbing, new heating and air-conditioning, and new sound and projection equipment, not to mention a new screen, since the original had been ripped out.

Seats were recovered, and seating was reduced from 500 to 325. New carpeting, paint and light fixtures were added, and a new concession stand built from an area in the rear of the auditorium that once had been a standing-area for late-comers or for those who needed to stretch their legs during a long movie.

The old marquee, which was missing most of its glass was restored, and relit, once the pigeons that had long made it their home were evicted.

The Ada Theatre reopened in late-1986 with “Top Gun”. Since then, renovations have been ongoing while the theatre continues as a first-run house, a rare still-operating classic single screen theater. The Millers celebrated the Ada’s 50th anniversary in 1998 by screening the Marx Brothers' classic “A Night at the Opera” along with shorts from the Three Stooges and Bugs Bunny. Admission harkened back to 1938 prices-a dime for children, and a quarter for adults. It was operated by M.E. Theatres, but is now independently operated.

The September 17, 1938, issue of Boxoffice said that construction had begun on the Ada Theatre. The house was to be operated by Clarence A. MacDonald, operator of five theaters in Columbus.

The Ada was designed and built by the F&Y Construction Company (later renamed F&Y Building Services.) F&Y head Leo Yassenoff told Boxoffice that his company had completed or had begun construction on 11 theaters since December 15, 1937.

In 1948 the owners were Leo, Betty & Milton Yassenoff. Their Academy Theaters chain was headquartered at 328 E. Town Street in Columbus. They also ran the Odeon in Ada at that time.

The Ada is, I believe, for sale. The listing is through Century 21,
sorry, I didn’t jot down the number.