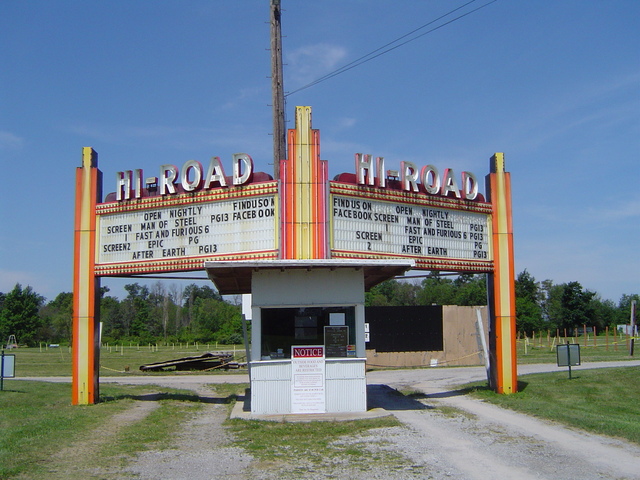 The Millers acquired the Hi-Road Drive-In in 1999, and found it needed a lot of work, having fallen into disrepair over the decades.

The Millers remodeled the concession booth, cleaned and cleared the lot, and restored the Artcraft marquee to its original 1940’s appearance.

The Millers are currently seeking to replace the present screen with one close to the original screen’s size as well as improve lighting around the parking area and driveway.

The Hi-Road Drive-In can accommodate over 600 cars in its lot, and now has two screens.

Operator in 1963 was General Theaters.

The High Road was opened the 3rd weekend of April, 1950
Billy Holcomb

In 1956 it parked 325 cars! Someone must have added on to the HI-ROAD DRIVE-IN. It was owned by Ohio Theatre Service Corp.

yeah,it gets hard to take that big Almanac out and give info,but so many people want it.Sometimes it is wrong and boy do they let you know.

Not sure what Almanac you are talking about but the HI-Road Drive In uses a double ramp system and parks 600 cars. In 2011 I added a second screen. So Screen 1 parks about 300 and Screen 2 about 250

Stopped in today and took a few pictures. Still screening in 35MM yet. Digital is on the way.

The Hi Road now has digital!!

rdoitmiller et al, back in the day, when a drive-in was doing really well, sometimes its owners would buy a chunk of adjoining land to expand. That might well be what happened at the Hi-Road.

Data dump from my Theatre Catalogs and Motion Picture Almanacs.

The Lima News: The Grand Opening was scheduled for Saturday, June 11, 1949.

The Lima News: In June 1958, Robert Hipp filed charges against two 19-year-olds for burglarizing the Hi-Road.

The Marion Star: In June 1961, “Merle E. Horst, manager of the Kenton Theatre and Hi Road Drive In Theatre” corrected an odd story of someone claiming to be with the theatres filming a city council meeting.

An ad for the Hi Road Flea Market (at the Hi Road Drive-In) appears in several June 1977 issues of The Courier of Findlay OH. But not a movie listings ad.

The Greenville Daily Advocate, Oct. 13, 1984: “Attorney’s (sic) and realtors have filed notices with the U.S. Bankruptcy Court in Dayton listing fees they wish to charge D.F. John and Diane Tabor, owners of … the Hi-Road Drive-In of Kenton” and nine other area theatres.

The Hi Road apparently began advertising in The Marion Star in August 1998.