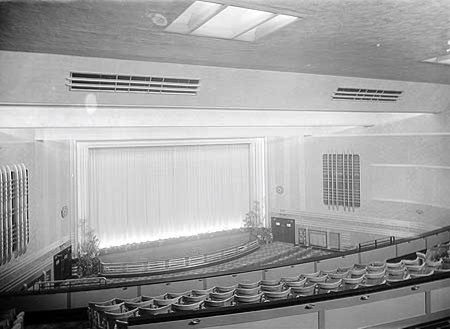 Located some distance away from the main town centre, at the corner of Conway Road & Marine Road. The Odeon was one of the orginal cinemas in the Oscar Deutsch chain of Odeon Theatres Ltd. It opened on 25th April 1936 with Robert Donat in "The Ghost Goes West".

Externally it had a slender fin tower, clad in cream faiance tiles and carrying the name ‘ODEON’ on top. The rounded single storey entrance on the corner was similar to the Odeon Sutton Coldfield, which had opened a week previously.

Inside the auditorium, seating was provided for 1,706, with 1,128 in the stalls and 578 in the circle. The sidewalls were plain, with only the splay walls on each side of the proscenium having a decoration of vertical bars over the ventilation grilles. There were troughs in the ceiling, which contained concealed lighting. It was equipped with a small stage and dressing rooms, though these were rarely used.

The Odeon was one of the early casualties of the refusal by the Government to exclude cinemas from Entertainment Tax, in an age when competition from television was increasing. It was closed on 5th January 1957 with Michael Craig in "House of Secrets".

The building then lay derelict for 10 years, until it was purchased by the Hutchinson Organisation of Burnley and was converted into a bingo club operating in the stalls, and a single screen 700-seat cinema operating in the former circle. Now known as the Astra Entertainment Centre which opened on 10th June 1967 with “Doctor Zhivago”. The bingo club closed on 9th March 1986, and the cinema closed on 10th October 1986.

A vintage photograph taken in 1936 by John Maltby, and now part of the English Heritage Collection:
View link

I know I sound like my needle`s stuck but this really is a tragic loss. The ODEON here was a thing of great beauty to me and hardly to be found on just any street corner.

Hmm.. This site is full of Tragic Losses… Alas Replaced by very substandard buildings.. and Cinema lacking The Magic.. Its called Progress

Two minds with a single thought you could say…

Undated photo added courtesy of the I Grew Up In Maghull Facebook page. Page link below.

The Cinema – Bingo Development was designed by Modernisation Ltd. (John Freeze-Green) He had a financial interest in this site for a number of years.