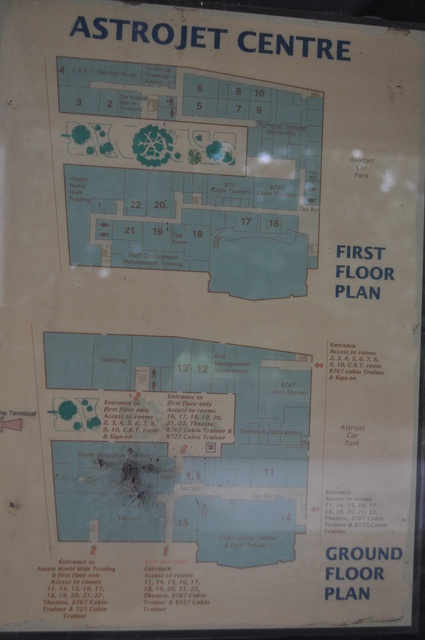 Located close to Terminal 2 at Melbourne’s international Tullamarine Airport, at the junctions of Centre Road and Departure Drive. The Astrojet Cinema was opened when the airport opened in July 1970. Playing first run suburban releases, it was not a great success. Advertisements seen, show it still operating in July 1975, it was closed in mid-1978.

In March 2011, the empty building stood, awaiting demolition, to build a planned new hotel on the site.

Maybe the jet noise from the Airport Killed it.

Maybe Mike,now they are going to build a Hotel there,lets see how it goes?

Yes,makes no sense unless it is not a real large airport.

The Astrojet was one of the great independent cinemas in Melbourne from it’s opening with Tullamarine International Airport in July 1970 as part of the Astrojet Space Centre.

The cinema seated around 300 and was open Wednesdays-Sunday nights, showing double features at 7.45pm, and matinees Saturday and Sunday afternoons. The movie programming was careful not to clash with the nearby Village Essendon drive-in. The Saturday afternoon matinees at 1.45pm were huge successes as were school holiday screenings.

The Space Centre was destroyed by a huge rainstorm in 1974, leaving the cinema to continue to operate as per normal. When the Airport doubled the theatre’s rental rates, it was forced to close in mid 1978, not because of lack of movie patrons.(Years later this manager went on to run the Lumiere Cinemas in Lonsdale St)

It was used for years as a training facility for Ansett Airlines until their bankruptcy in 2002. Various customs brokers and local traders continued to have offices in the centre to this day.

In my opinion, this little theatre would be THE perfect venue as a home for Australian movies — arthouse, genre, classics etc — as well as continuing it’s original second-run double features as in the 1970s.

Such programming would not clash with nearby Airport West and Broadmeadows multiplexes and would be of great interest to visitors to the airport as well as those staying at hotels already at the airport (this theatre is surrounded by hotels already, including a Hilton!)

Tullamarine Airport is Melbourne’s main international airport and what better venue for Australian productions than the Astrojet Cinema? Away from the city, but centally located for a world’s audience

Also — jet noise was never a problem as the planes took off on the other side of the airport.

It would also make a perfect digital cinema for limited theatrical releases of movies that would have gone straight to bluray/dvd — this complex has stood empty for years without anybody realizing the benefits of it’s location, facilities, past history (not even on this website it seems — when the experts get their facts wrong, you know nobody, anywhere, knows the truth about this venue) The Space Centre section of the building would make a perfect convention venue (or second theatre) but certainly, not another hotel….

If there are any Australian theatre circuit operators (or Melbourne cinema operators), there is not one better venue left in Melbourne than the Astrojet Cinema — after 33 years, it’s time for a revival, this time as a theatre for Australian theatrical features and shorts as well as a digital/second-run programming site. This GENUINE cinema treasure is waiting for smart business arrivals now at Melbourne Airport — my hope is that it is not too late.

It has not been demolished, it was still standing in mid-February 2020.