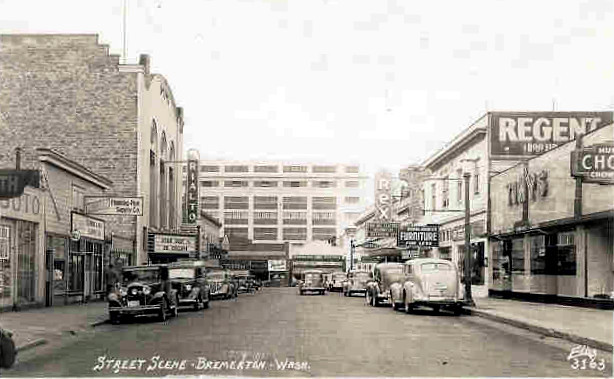 The Rialto Theater was opened February 6, 1918 with Mary Pickford in “Stella Maris” and Fatty Arbuckle in “Out West”. By 1941 it was operated by Fox Theatres. It was still in operation in 1950.

From the 1930s a photo postcard of the Rialto and Rex Theaters in Bremerton.

The March 16, 1918, issue of The Moving Picture World said that the new Rialto Theatre in Bremerton had opened on February 6. The house was operated by Eugene Oswald and Jack Rantz, who had been operating Bremerton’s Dream Theatre for several years. The new Rialto had been built at a cost of $50,000, and opened with two Paramount films: Mary Pickford in “Stella Maris” and Fatty Arbuckle in “Out West.”

The May 23, 1917, issue of Building & Engineering News had an item about this theater:

The June 27 issue of the same journal noted that the contract for the project had been let.

Architect Maximilian B. Umbracht practiced in Seattle from 1900-1907 and again from 1912 to 1922, following which he returned to his home town of Syracuse, New York.

The Osran Amusement Company (Oswald and Rance) operated several theaters in Bremerton during this period. It eventually became a subsidiary of Evergreen State Amusement Corporation.