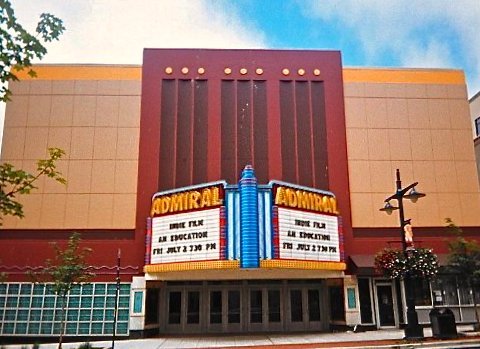 The Admiral Theatre originally had 1,500 seats when it was built in 1942 at a cost of $250,000. In the early-1980’s it was split into three theatres but closed in 1988. In 1990 the citizens of Bremerton formed the non-profit Admiral Theatre Foundation to restore and operate it. After $4.2 million dollars were raised, the Admiral Theatre opened again in 1997.

Today the cabaret-style main floor seats 300 and the traditional balcony seats 502. The Admiral Theatre, which is called “the premiere arts presenting venue in the West Puget Sound Region” offers catering services and is available for both public and private events.

Does the Admiral ever show films?

The Admiral Theatre was operated by Evergreen State Amusement Corp., which was one of the subsidiaries of Fox Theatres and later known as National General Theatre.

What a great marquee

The picture at the top of the thread is the Admiral Theatre in Seattle Washington.

William is incorrect. The photo at the top is indeed the Admiral in Bremerton.

Spent many hours here as a kid in the 60’s and early 70’s. We would buy cheap popcorn at the Kresge’s 5&10 next door and hide it under our coats until we made it to our seats for the movie.

I understand Bill Gates donated a significant amount of money to this theater. He attended this theater as a child.

I’ve had the pleasure of attending a few concerts here. Fantastic acoustics and intimate atmosphere. They have a regular film series each year, which I believe is DVD projection.

An early item about the house that was to become the Admiral Theatre appeared in the January 3, 1941, issue of The Film Daily:

“Portland, Ore. — Frank Newman, Sr., of the Evergreen Theaters, operating some 39 theaters in Oregon and Washington, announces that contract has been let for a 1,500-seat house, the Rivoli, at Bremerton, Wash., known as the Navy Yard city.

“The new theater to cost an estimated $300,000, will occupy a site 103x135 feet in size at Fifth Ave. and Pacific St. Plans are being prepared by McClelland & Jones, architects, who announce that the new house will be similar to the Academy Theater in Los Angeles.”An article in the September 19, 2014, issue of The Bremerton Patriot about the 75th anniversary of the house confirms that it was originally to have been called the Rivoli, but in June, 1941, Evergreen Theatres held a “name the theater” contest and Admiral was the winner.

I’ve been unable to find any other sources naming McClelland & Jones as the architects of the Admiral, but neither are there sources naming anyone else. The firm, consisting of principals Robert F. McClelland and Victor N. Jones, was active from around 1933 to around 1946.

“At 75, Admiral Poised for Another Big Opening”

Includes many photos from different decades in the Admiral’s life.