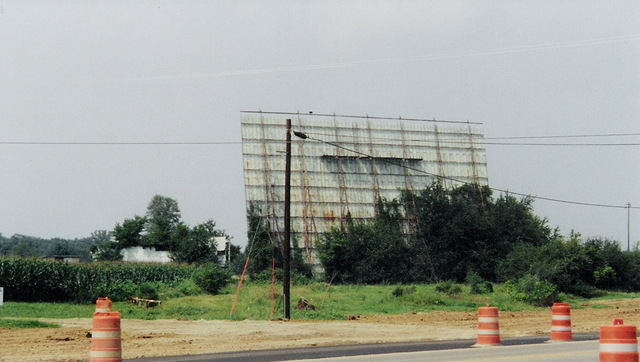 The Heath Auto Theatre was located in Heath, Ohio and opened August 28, 1953 with “Golden Girl” and “The Battle at Apache Pass”. It held 600 cars and was owned by Tri-States Theatres in the late-1950’s.

I was born and raised in Heath, OH. I can tell you that this drive in was (and still is) located on Hebron Rd (SR 79) in Heath, Ohio. Back in the day a lot of businesses in Heath were listed as Newark because they shared a zip code and Newark was the larger of the two cities. Heath now has its own zip code, 43056, and is BY FAR the better city when compared to Newark. Every single new business opens in Heath and I don’t know anyone who would rather live in Newark than Heath. I was born in 1970 and anytime after that there was never a drive-in on Channel St in Newark. The Newark drive-in was call the Valley Drive-In and was located on 21st Street on the north side of Newark. I have been to both many times, including on the grounds of the Heath theater within the last couple months. I also have a lot of memorabilia from both drive in theaters. Hopefully this clears things up. If you would like pictures of what I have to post on the site let me know and I will email them to you.

Clarence..I’m working changing the city on the overview.

I would like see what you pictures you have of both drive-ins. I working new historical overviews for both.

So do I understand this drive-in is still standing and not demolished??

I stopped and looked at last summer. The drive-in is still standing but in bad condition. The concession stand/project booth was set on fire and destroyed. The screen tower looks decent yet. It could reopened with some work and $$$$$ !!

I have current pictures I need to put on CT.

By the way the person who used to own the drive ins lives above the (heath) drive in that’s actually located in Hebron!!

her name is Sally Price!!

This opened on August 28th, 1953. Grand opening ad in the photo section.

Hi I am Sally thanks for all the comments. I do have a Heath Drive In on FB. The fram is now for sale and it is 1949 Hebron Rd SE Heath Ohio 43056. Drive In and Land combo deal the screen is still in good shape. It does need clearing around it , I attempted to clean it up then, I was stopped by Charles Price , sorry.It was beautiful when I lived there. Any intrest please contact Park Shai Granville Ohio. Thanks Sally Price

The House has been demolished due to my brothers lack of intrest in there faimly or anything we had. After my dad and mom died they took everything we worked for and distoryed it.