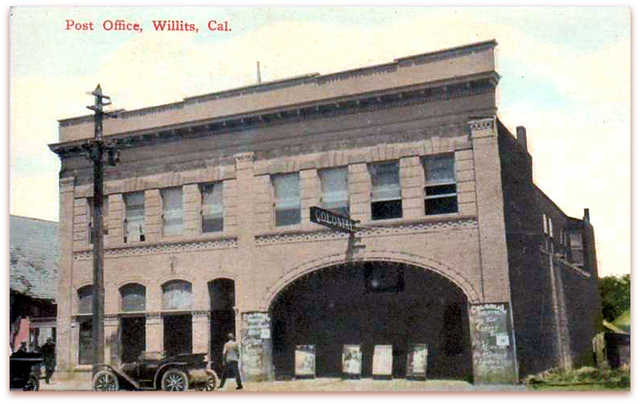 The caption of this photo from Flickr user Larry McCombs says that the Colonial Theatre was in the space now occupied by a clothing store at 225 S. Main Street. The building was built in 1913 and, in addition to the theater, housed the Post Office.

A comment on the Noyo Theatre page says that before the Noyo opened Willits also had a 417-seat house called the Willits Theatre. Could that also have been an aka of the Colonial? If the Colonial only occupied half the width of its building it looks to small to have had 417 seats, but if the auditorium was the full width it might have been big enough.

From the early 1900s a postcard image of the Colonial Theater in Willits.

The Willits News, Friday, May 1, 1936. “The Willits Theater is the new name of the local playhouse. When the new marquee is completed on the front of the building, the name Willits will not only proclaim the theater but will identify the city to all tourists passing through. The work remodeling the building is well under way. During the past week the new floor has been laid, the projection room has been set back and enlarged, and the screen set back several feet and properly draped. This makes it possible for patrons to view the picture from any seat in the house to much better advantage than in the past. The new seats, 100 in all, have been installed and they are much more comfortable than the old ones. Carpenters and electricians are still busy on the outside improvements which will completely change the front of the building.”

It was originally The Majestic Theater back in 1910 according to the Willits News, August 13, 1910.