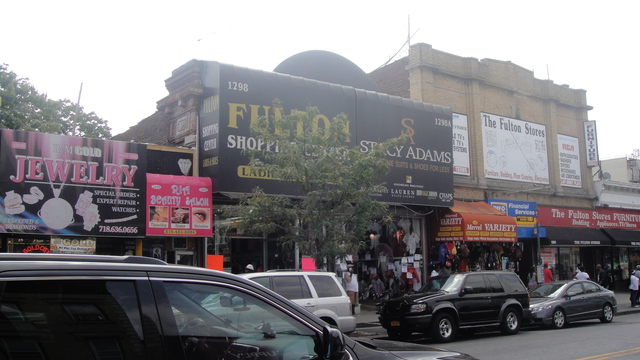 The Fulton Auditorium opened in 1908. By 1913 it was screening movies.

From October 28, 1948, it was renamed Banco Theatre with the movies “Kiss of Death” and “The Cisco Kid”. It operated as an African-American theatre until at least 1955. It had a triangular shape marquee with a big neon lettering on the top edge of the marquee, spelling the name ‘Banco’. It’s location was at Fulton Street & Nostrand Avenue in the Bed-Stuy section of Brooklyn.

The Banco Theatre was closed in 1976.

Here’s a 1972 image from the great American Classic Images website, with a classic early ‘70’s grindhouse feature advertised on the marquee.

A pair of stores (one ladies shoes and apparel, the other mens suits and shoes) occupy the old theater building, which now has an address of 1298 & 1298A. The edifice above the entrance has been clad in blue signage that appears to be made of the soft but sturdy material used for commerical awnings. From the looks of it, the eagle that once crowned the cornice above the entrance may still be there under a dome shaped extension of the signage material.

Public records show that the entire lot (which encompasses several buildings) has been owned by the same company since 1968. That company had offices at 1290 Fulton Street out of a furniture store called Fulton Outfitters. The address 1292 is currently one of the storefronts to the right of the former theatre entrance (which today seems to have been expanded from the adjacent 1290 Fulton, where the owners had their offices back in 1968). All of these addresses are encompassed by the one tax lot, so it appears it was a case of one the tenants buying the parcel from their landlord, possibly with the idea of expansion. Looks like several (if not all) of the shops fall under the umbrella of “The Fulton Stores.” The theatere probably had a lease that ran out (or was bought out) in ‘76.

The oldest Certificate of Occupancy on record for the lot is dated April 10, 1935, for the address 1292 and lists a show room and cabaret on first floor and “dance space” on the second floor. The next C of O, dated November 15, 1948, was issued for the address 1296/1298 Fulton Street and includes a “Motion Picture Theatre, no stage, no dressing rooms” with max 570 “persons accommodated” on the first floor and Projection Booth on the mezzanine. A later C of O dated June 25, 1951, for address 1292/94 Fulton, provides for a restaurant and a laundromat on the first floor, with music and dance studio on second floor. I think this tells us that at the time of operation, the theatre was located at 1296/1298 Fulton Street. Perhaps the proprietors had office space at some point in the adjacent building at 1292 Fulton.

Google map the address and use the Street View feature to get a more-or-less current image of the building.

I worked in this theatre a couple of times in the 60’s and can say, without reservation, I’m glad it’s closed. This theatre and about 5 or 6 others in Brooklyn were a disgrace to the word “theatre”.

Hey Bway… Looking at your alternate street view showing the wrap around detail still left from the upper facade of the building, looks like I was wrong in my April, 2011, post when I thought that perhaps the eagle sculpture still stands at the apex of the curved cornice. It appears from your street view that the platform on which the eagle once stood may still be intact behind the new signage, but the eagle itself is gone (and, likely, long gone).

Man-o-Man guys, I agree the Banco was a mess, the floor was always sticky & the place always seemed “DDD” (dark,dank & dirty),but the Banco & Regent was the only movie theaters in our neighborhood,AND! they would let a bunch of 12 & 13 yr old boys go in by themselves from ‘70-'73, to see the latest Karate & Blaxploitation movies. We could care less what the decor was when we got to see the latest Bruce Lee movie or nudity in the Blaxploitation movies,lol. We never brought anything to eat or drink from there for 3 reasons #1:everything looked old and nasty, #2:there was never anybody behind the consession stand, and #3:we never had any money left over to buy anything anyway. OMG! Thinking back now,#3 was probably the biggest contributing factor why we never got anything to eat or drink there, hmmm, thank God for small favors huh? lol. However, the Banco still provided great growing up memories for me.

this theater along with the Apollo up the block where i lived were dear to my heart.i wish there was a photo of the Banco. we also went ther on saturday mornings too.

Volume 1 of Cezar Del Valle’s Brooklyn Theatre Index gives operating dates of 1908 to 1931 for the Fulton Auditorium, and October 28, 1948 to 1976 for the Banco Theatre. That fits in with the 1935 Certificate of Occupancy for a cabaret and show room on the ground floor, cited in an earlier comment by Ed Solero.

Brownstoner has this page for the building at 1298 Fulton Street, which says that the plans for the 1913 conversion of the theater into a movie house were by architect James Boyle. This project was probably fairly extensive, as the July 6, 1910, issue of The Film Index ran a brief article about the Fulton Auditorium which said that it then had about 300 seats.

The article is worth quoting in full for its depiction of the nascent star system, which had barely begun, as well as its brief description of the Fulton Auditorium itself:

“Filled with photographs and announcements of the ‘Vitagraph Girl’s’ appearance and reception, the lobby of the ‘Fulton Auditorium’ of Brooklyn, presented a very brilliant display. A large automobile stopped in front of the theatre and Miss Florence E. Turner, ‘The Vitagraph Girl’ with the Vitagraph representative alighted from the tonneau and were greeted by Mr. Charles Cranides, the Manager, and a large congregation of spectators who were waiting to get a look at Miss Turner to see if she is as attractive in reality as she is in the pictures. Entering the Auditorium which was already crowded, ‘The Vitagraph Girl’ was introduced to the audience by the representative and received a royal welcome. In response Miss Turner said: ‘I don’t know what to say in addition to my flattering introduction to you. I don’t know that I look all that has been said about me. I am glad to know I am so well thought of and I will do my best to sustain and merit your good opinions and kind appreciation of me. I thank you all and hope I shall meet you often in person as well as in the Vitagraph pictures.’

“This little speech was greeted with applause, three or four attendants came forward and handed Miss Turner several bouquets and baskets of flowers which almost hid her from view.

“Mr. Arthur Ogden in a rich baritone voice sang the popular motion picture ballad ‘The Vitagraph Girl’ illustrated by a series of beautiful colored slides followed by two or three Vitagraph films in which Miss Turner featured. Afterward an informal reception was given to the guest of the evening by the audience who came forward to shake her hand and make her acquaintance. Manager Cranides arranged a very delightful supper for Miss Turner and her friends and did everything possible to make things pleasant for everybody.

“There is a right and a wrong way of doing things. Manager Cranides has the right one. His theatre is run right with all conveniences and comforts. It seats about three hundred; has a pipe organ for special music as well as a piano. The auditorium is large and airy and always filled with an exceptionally refined audience who are always greeted with a welcome smile or a cheerful good evening from Mrs. Cranides who is just as nice as her husband.”I’ve been unable to discover the name of the original architect, or of whoever planned the alterations that must have been needed when the house was reopened as the Banco Theatre in 1948.