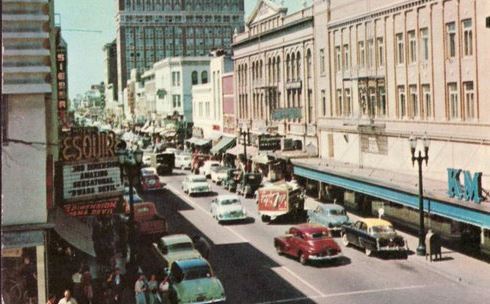 The Esquire Theatre was opened on November 27, 1946 with Dana Andrews in “Canyon Passage”. It was operated by Blumenfeld Theatres chain, and was closed in 1954. The name ‘Esquire’ was then moved to the former State Theatre.

Boxoffice of June 5, 1954, reported that the Esquire Theatre in Stockton was to be closed to make way for a new J.C. Penney department store. The item did not specify if the building was to be demolished, or merely adapted for the store.

The Esquire had been open less than eight years when it closed. A Boxoffice article of May 18, 1946, mentions in passing that the Esquire Theatre in Stockton was “nearly completed.” Work was delayed, though, and a short article in the December 14 issue that year announced that the Esquire had finally opened after thirteen months of construction.

The house had cost $200,000 to build and equip, and was Stockton’s fourth first run theater. Boxoffice gave the seating capacity as 1190, and described the auditorium as being decorated with fluorescent murals having a Chinese theme.

The 1954 article about the closing also said that Blumenthal Theatres was in negotiations to take over the recently closed State Theatre, and planned to move the Esquire name to that house. According to comments by ksutterfield on the State Theatre page (Nov 29, 2009, and Dec 1, 2009,) the State did become the second Esquire, and he worked at the house from 1960 to 1963.

This theatre’s name appears in the President’s Commission report on pornography that was done in 69-70. It seems that it had reopened sometime prior to that and was showing adult films.

The theater was operated by Westland Theaters of Stockton during the 60’s and early 70’s.

The Esquire that ran X-rated movies in the 1960s-1970s was a different theater, and this Esquire was long gone by then. The photo currently displayed above depicts the former State Theatre, which was renamed the Esquire after the original Esquire was closed in 1954, at which time it was either demolished and replaced by a department store or was converted into a department store.

Here is a 1936 photo of the State. It is a close shot, but the brickwork on the facade is recognizable as the same brick in the Esquire photo above. The photo should be moved to the State Theatre page. JasHarv’s and mjprigge’s comments, or course, also pertain to the former State.

A note that the name Esquire was moved to the former State Theatre in 1954 should probably be added to the introduction, to reduce confusion. And as the State operated as the Esquire from 1954 until at least the early 1970s, maybe that page should be renamed as well.

OCRon’s link. Both locations of the Esquire Theatre are listed, with small photos. This one, at 546 Main, was on a corner lot, while the second Esquire, in the former State Theatre, was mid-block.

In our photo section, all the exterior shots except this one depict the second Esquire. I don’t know which theater is shown in the single interior shot.