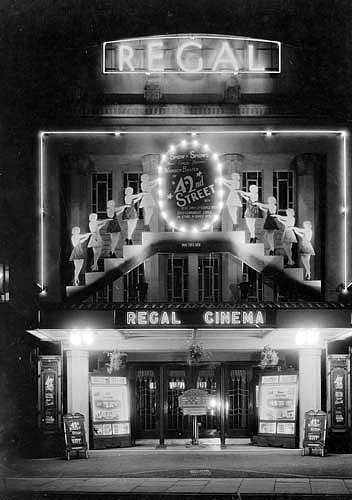 The Regal Cinema was opened on 18th July 1932 with Maisie Gay in "The Old Man" and Shirley Dale in "The Begger Student". It was designed by Birmingham based architect Harold Seymour Scott, who was also one of the directors of the independent operating company.

Styled both externally and internally in a ‘delicate’ Egyptian/Art Deco style, seating in the auditorium was provided for 1,000 in the stalls and 300 in the circle. The proscenium was 40 feet wide, and there was a cafe for the convenience of cinema patrons.

By November 1932, it had been leased to the County Cinemas chain. Briefly taken over by the Oscar Deutsch chain of Odeon Theatres Ltd. in September 1939, it soon went back to the original independent owners in around 1941.

In August 1943, it was taken over by the Associated British Cinemas(ABC) chain. They operated the Regal Cinema until July 1969, when the Star Cinemas chain took over. Part time bingo was introduced on several nights a week, and the Regal Cinema screened its final film; Bruce Lee in "The Big Boss" on 10th July 1974. It was then converted into a full time Star Bingo Club.

In the late-1970’s, the building was sold and was converted into a Kwik Save supermarket, with a snooker club operating in the former cafe area. By around 2008, the building was ‘For Sale’ or ‘To Let’ for leisure use. In February 2010, plans were proposed to demolish the auditorium and build a hotel on the site, retaining the Regal Cinema’s facade as the entrance. In January 2015 plans were proposed to demolish the auditorium and build flats on the site, again retaining the façade. In October 2016, the building still stands vacant. Planning permission was given for flats and retail units on the site and demolition began on 26th July 2018. The facade will be retained.

The former Regal Cinema, photographed in July 2008:
View link
An Autumn 2009 photograph of the rear of the auditorium:
View link

I was in Litchfield on my first ever visit today,I’ve uploaded a couple of photos.I was surprised to see that the steps up to the box has no barrier,rather tempting & hazardous for children I would have thought. I wonder if this was the only entrance to the projection suite or just a fire escape.

It is just a fire escape. Main entrance to the Projection Box is internal..

Thanks Mike, must have been nice to know the fire escape was there, as where I worked The Town Hall Cinema in Pwllheli had none, and was almost twice as high. They did build one in the seventies but only down to a room underneath the flat roof, so you’re still inside the building.

Under the current Act of Parliment there needs only to be one entrance into the Projection Box.. Providing the Cinema do’s not show a nitrate print.. I had a Disagreement with a Birmingham Fire Officer over this point. So I got the Home Office Technical man up to deal with it.. The Fire office told him he was wrong.. Great Fun happened.. Fun to watch.. Fire officer left with is tail between his legs :o)

We had many a run in with the fire officers, if they happened to visit our place first of an evening the then chief would send me down to the other cinema in town that he was on the prowl ! I still like the idea of a fire escape from the box though, it’s not just a fire in the proj room that could get you, especially at our place, one would have to use the same stairs as the audience.