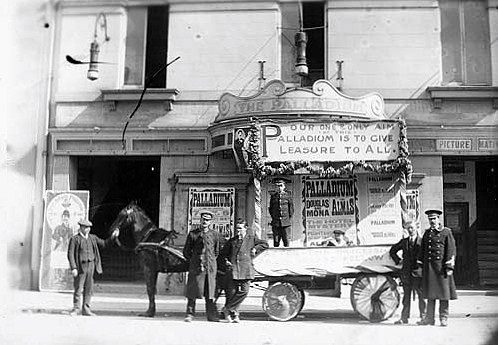 Located in Lichfield, Staffordshire. The St. James' Hall was built around 1874 on the site of the Theatre Royal (1792-1872). In the early-1900’s it was presenting live shows, pantomimes, and film shows.

It was updated and re-opened on 23rd December 1912 as the Palladium Theatre, screening films. It was purchased by J. Mortimer Dent for his Danilo Cinemas circuit in March 1936, and after a refurbishment it re-opened as the Lido Cinema on 23rd January 1937 with Shirley Temple in “Captain January”. The auditorium had a 26 feet wide proscenium and the stage was 22 feet wide, with 4 dressing rooms. The building next door had been converted into the cinema cafe. The Lido Cinema was badly damaged by a fire which broke out in the balcony in the early hours of the morning of 23rd November 1942.

Although this was in the middle of World War II, it was allowed to be refurbished to the plans of architect Archibald Hurley Robinson, and re-opened on 14th July 1943 with George Formby in “Get Cracking”. The Lido Cinema was closed on 5th March 1949 with Sally Anne Howes in “My Sister and I” and “Dumb Belle of the Yukon”.

It was refurbished and re-opened as the David Garrick Memorial Theatre presenting a production of “Rebecca”. Live theatre use continued until it closed on 4th July 1953 with a production of “The Deep Blue Sea”.

It re-opened as the Adelphi Cinema on 3rd August 1953 with Alan Ladd in “Desert Legion” and “Black Orchid”. The Adelphi Cinema was closed on 31st October 1959 with Micheal Gough in “Horrors of the Black Museum”.

The building was converted into a supermarket, with a false ceiling across the auditorium under the the balcony level, thus hiding the upper parts. The supermarket had closed by 1991, and the building was ‘For Sale’. It has now been demolished and a branch of Wilkinson hardware stores is now on the site.

This website has pictures of the theatre as the Palladium and the David Garrick.

The Wartime repair was a very spartan… I remember seeing the interior in 1968 when I did Reliefs at the Regal. The Chief Projectionist at the Regal Had been the last manager of the Adelpi

As I was in Litchfield today for the first time ever, I thought I’d take a photo of what now stands on the old Adelphi site.