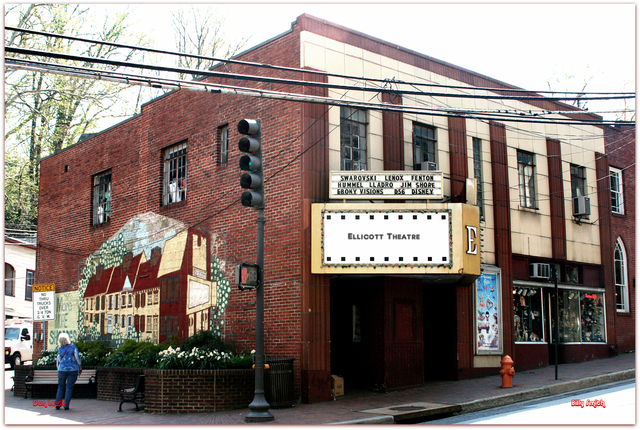 In 1980 plans were made to re-open as a movie theatre, but it became a children’s theatre, a grocery store and a comic book store. The Ellicott Theatre was reopened as a live theatre in December 1994 and in 1995 it became a performing arts center, presenting puppet shows, plays and live music. It briefly reopenedc as an art house theatre. It was closed in 1997 and became a gift store.

The 400-seat Ellicott Theatre (1942 FDY seat count) probably opened in 1941. The July 3, 1941 issue of The Film Daily said that Motiograph projection and sound equipment had been installed in the Ellicott Theater, Ellicott, Md., indicating a likely opening within a month or so.

Ellicott City’s earlier movie house, the Earl (or Earle) Theatre, burned in December, 1941. I suspect insurance fraud might have been involved.

It did briefly re-open as a arthouse movie theater in the mid 90s. I saw THE SECRET OF ROAN INISH and a midnight screening of DAZED AND CONFUSED there. It’s currently a knick-knack shop that only uses the lobby.