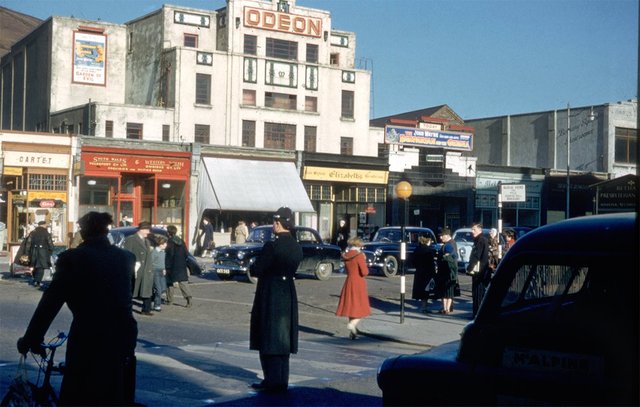 The building remained in cinema use until it closed on 27th March 1971, when the Rank Organisation suddenly pulled out and sold the building.

It was converted into an independent bingo club, which closed on 6th September 1980. The building lay unused until its demolition in July 1995 for a new Tesco store, by which time it was in a terrible state of repair.

Some additional info for the Majestic/Odeon.

Opened 11th January 1938 in an official ceremony with the mayor Sir Geoffrey Byass in attendance.

The cinema was fitted with a Weston Electric Sound System.

The first Manager of the cinema was a Mr Vivian Aldridge who had previously managed the Gnoll Cinema in Neath for six years.

In the book Odeon Cinemas 2,on pages 11/12, Allen Eyles records that the Majestic, having been planned by Odeon was built for Max Corne and part of the deal by which his cinema in Cardiff(recently reconstructed and named the New Imperial) was acquired for further rebuilding as an Odeon(opened 1936). Odeon (1943)purchased three of Corne’s four cinemas in South Wales, including the Majestic.