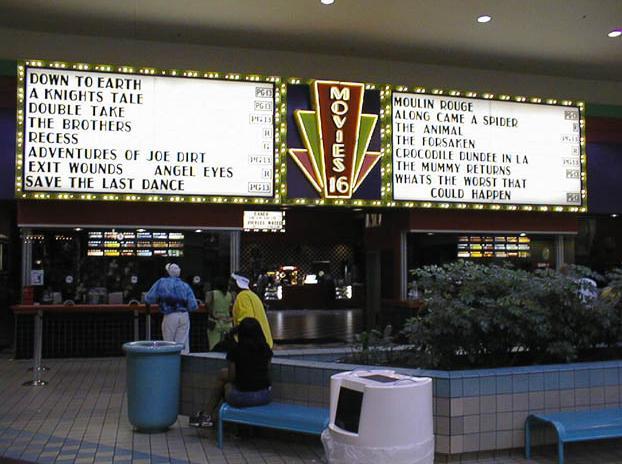 A large second-run complex which opened November 8, 1991 as an addition to the Universal Mall. It was closed in November 2016 and was purchased by MJR Theatres who are renovating and it reopened April 7, 2017.

This theater will be closing soon as it was purchased by MJR Theatres, set to be remodeled and reopen in February 2017 as an MJR 16(?)-screen cinema showing first-run films. Thus, another second-run house in the suburban Detroit area is (sadly) about to bite the dust, and those who missed seeing a film the first time around will no longer have the opportunity.

(It would seem second-run houses are becoming a thing of the past. Shame!)

Cinemark elected not to renew its lease with the owners of Universal Mall when it expires November 31. So, even if MJR didn’t buy the property, the cinemas would have closed anyway.

MJR will be spending $4.4 million to renovate the cinemas, which will include 3 3-D ready auditoriums, electric leather recliners, and a bar.

Renovations will begin December 1, with a target date of mid-February 2017 slated for the opening.

By the way: I found out that additional info from a Detroit News article on the web. But, I do think it’s a crying shame second-run houses are nearing extinction!

This location has now closed.

Just out of curiosity, Kevin: What were the last films playing at the Cinemark when it closed?

When I made a return visit to Warren in late September, I saw “The Secret Life of Pets” at the Cinemark; by contrast, the very first film I remember seeing there was “Doc Hollywood” in October 1991.

But, when I come back to visit the area again, I have an MJR points card, which is still active. So then I’ll have yet another choice for first-run films (but, as I said before, it’s sad second-run theaters are becoming extinct; after moving to Charlotte – outside Lansing – two years ago, I found out there aren’t any second-run cinemas in this area, period!).

The Cinemark 16 was the home of $1.50 shows for many years, as well as the location of many personal movie marathons. There was nothing like arriving on a weekend or weekday off and blasting through 3 (or 4 if you could time it correctly) movies in a single day in the early to mid-90’s. They did a good job of getting films three or four weeks just before the DVD or VHS release. Cinemark’s decision to build a brand new 16-screen dollar theater was a puzzling one at the time but the concept was profitable as Warren is a blue collar, metro town and it catered to the attitude of the city.

However, some believe the Cinemark 16 was the reason the Universal Mall became a bit of a less than desirable spot. It was common to see security in the lobby as there were car thefts, fights, theft and homeless dwellers who would frequent the facility. Budget theaters bring out a different crowd. People were always late to screenings, patrons were rude and would often talk through the entire course of the film, but that was part of the charm and experience of the dollar cinema. You don’t feel bad leaving if the movie is terrible or the audience is disruptive.

When the mall closed and was demolished, Cinemark built a new facade for the theater but nothing inside changed.  Cinemark never made any effort to update the facility from the 90’s to 2016 aside from going digital when it finally became a part of the MJR Chain. It was dirty, dingy and the seats and projection were in tough shape in it’s final years.

MJR has completely transformed the entire lobby, but the theaters are very much in the same layout with cleaner, updated features.