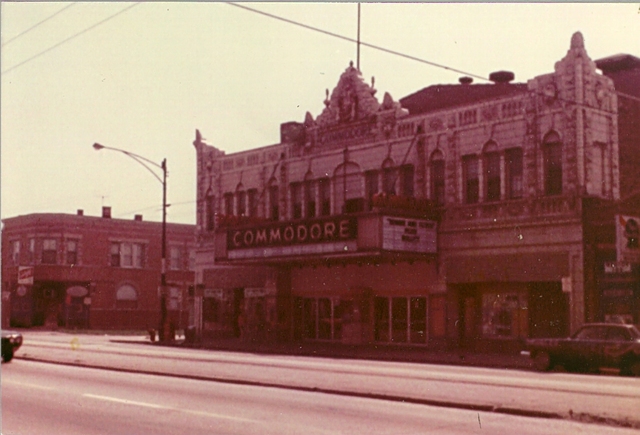 The Commodore Theatre was built for the Gumbiner Brothers circuit in 1921 on Chicago’s North Side. It stood on W. Irving Park Road at N. Albany Avenue. This 966-seat theatre served as a popular neighborhood movie house until closing in 1981. It re-opened for a while as the Cine' Olympia.

It fell into disrepair, and began to be used for illegal activities. For years, the residents of the surrounding neighborhood appealed to the city of Chicago to have the dangerous former movie house razed but it wasn’t until late-1990 that the Commodore Theatre was finally demolished and afterward, a strip mall built on the site.

I used to go to the Commodore every Saturday morning with my friends, in the late 1950’s and early 1960’s. I remember seeing “Gorgo” (kind of a giant lizard Godzilla ripoff) and a film that absolutely terrified me, “Black Sabbath”, aka “I Tre volti della paura”, a trilogy of really scary stories with Boris Karloff—which I believe was the inspiration for naming Ozzy Osbourne’s band. I think the balcony was still open at that time—you HAD to sit up there, because if you sat downstairs the kids in the balcony would throw jujubees in your hair or pour soda pop down on you. Saturdays, you could see a double-feature plus a string of old serials from the 1930’s (“The Claw”), a bunch of cartoons and get a box of popcorn all for a handful of change. We’d spend the whole morning there.

In 1977, my father, brother and I saw a fanciful World War I action drama at the Commodore called SHOUT AT THE DEVIL, starring Lee Marvin and Roger Moore. At the time, the theater was showing Bollywood films late in the evening after the mainstream releases. I remember the crowd for the south Asian feature was much larger than the group who saw SHOUT AT THE DEVIL.

Here is the theater in 1982, when it was the Cine Olympia:
http://tinyurl.com/dhjppw

If you want an example of how the Internet is making the world a smaller place, here you go: a photo of the Commodore appears on cover of a CD by a Croation band, released on a Brazilian label. There’s a short review at: View link

Not sure whether or not it’s their official site, but there’s a page for the band (Florence Foster Fan Club) at http://www.myspace.com/florencefosterfanclub

I am SO excited to have found this page !!! From 1968-1972, I spent the equivalent of probably, months inside the Commodore. $1.00 got me in ALL day on Saturdays,and it’s where I first saw Easy Rider,Bonnie And Clyde,The St.Valentine’s Day Massacre,Guess Who’s Coming To Dinner, and so many more.

Just posted this picture at WhatWasWhere. Go to this link, click Street View, and then use the slider to fade between this old view and what’s there now. I miss the Commodore, 15 cartoons and a feature on Saturday morning! http://www.whatwasthere.com/browse.aspx#!/ll/41.953983,-87.706035/id/55584/info/sv/zoom/14/

Here is a THSA picture of the Commodore.

Seen all the Bruce Lee movies there, does anybody remember Spike, the owner in the early 70’s, my uncle Joe use to clean the show and I would usher telling people to keep their feet off the chairs, lol, if you saw a black Cadillac and black lincoln in the front of the show let me know, brings back lots of memories.

My Father went to this theater when he was a kid and so did I! When I drove past it one day on the way to work it was in the process of being demolished. I just had to save what i could so i paid to have the terracotta removed block by block and passed down to me by rope! I shuttled van loads to a nearby garage i rented, then cleaned every block of the mortar and bricks attached still. After two more moves i still have the facade safely stored waiting for a new project they can be used on and once again enjoyed!