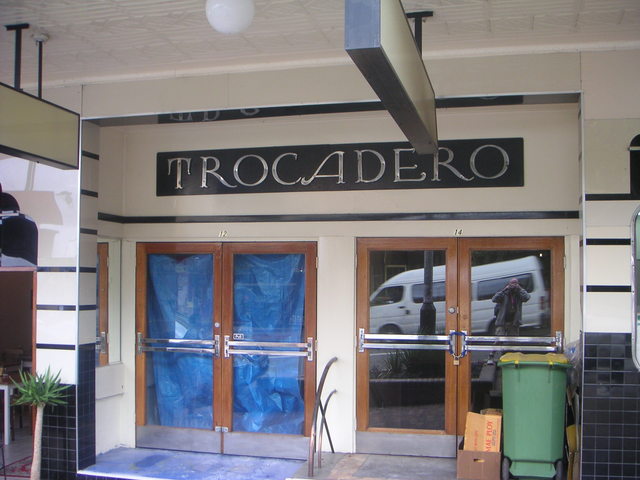 The old King’s Theatre stood on this site. It had been one of the earliest picture theatres to operate in New South Wales, opening on 25th December 1911. By 1925 it had become the Palais de Dance, and by 1930 it was used for skating and dancing. It was closed in 1931, and was used as a shop and warehouse. It was demolished in July 1936.

In its place was built the beautiful Art Deco style Savoy Cinema which opened on 18th December 1936. In the basement was a billiard hall, which later became a boys club. On 16th October 1945, a smaller 225-seat second cinema was opened in the basement area which was named Trocadero Theatre. It closed around 1965.

The Savoy Cinema closed in the early-1960’s, but later re-opened until it finally closed in 1977. Some years after closing, the empty building was partially destroyed by a fire in June 1982, which caused extensive damage to the auditorium.

Today the facade, entrance foyers and upper sections of the former Savoy Cinema are in use as the Savoy Cinema Restaurant and an Italian restaurant named Gustissimo. The building is listed on the National Trust Register.