Century at The River 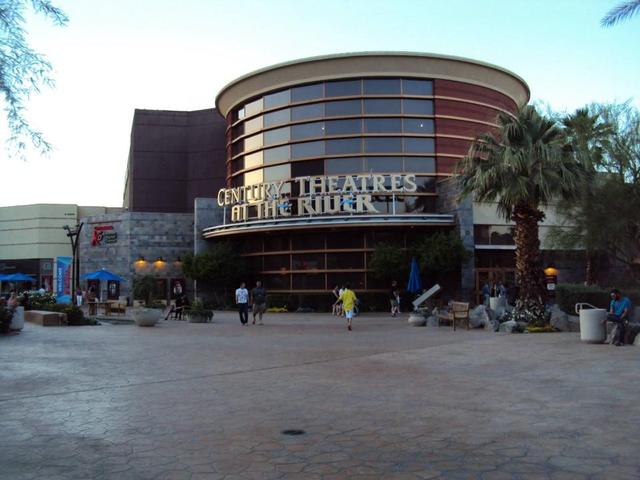 The Riverside Press-Enterprise said in November of 2001 that Krikorian Theatres was to open 12 screens at The River on December 5. In July of 2002 the Press-Enterprise announced that Century Theatres would be taking over operation of the complex on July 26 and would remain open during the transition.

The River was built as an upscale shopping, dining and entertainment destination and named The River because the J.H. Snyder Company, its developer, built it with waterfalls and streams flowing among rocks throughout the center. The Press-Enterprise said that would be 1.7 million gallons of water. Jerry Snyder said the River would use no more water annually than if it was planted with grass and to gain approval from the Coachella Valley Water District, his company had to build a 1 million-gallon water tank.

Cinemark is the operator of the now 15-screen theater but it retains the poetic name Century at The River.

This was initially slated to be an Edwards project. After Edwards fell in to bankruptcy, Krikorian was brought in to open/manage the theatre. I’ve been told conflicting stories as to whether Krikorian was intended to be a temporary operator or not; however, that obviously ended up being the case, as Krikorian was replaced in short order.

Unless Cinemark has done something to the place, the lobby looked just like that when I was last there in 2006.

As Christopher said above it started out as an Edwards project. I think Resort Theatres had a hand in it before they sold their Coachella Valley interests to Regal. Judging by the customization on the seats, the developer probably finished it off for themselves and got Krikorian to operate it.

I was part of the team that helped convert it over to Century. I remember going through and pulling out all of Krikorian’s stock and getting it all setup with Century products. I believe Krikorian used Movie Tunes and had music in the bathrooms and hallway. Century was inbetween revamping the “Century Radio Network” so we had some disc playing 2-3 songs on repeat from about 12am-6am as we waited for the Metro Food delivery.

The entire process of taking over somebody else’s thetre is fascinating to me. Everybody at Century wanted the theatre to BE a Century theatre by the time we opened the next day despite the fact that it was an Edwaresokrikorian Theatre, not designed in any way shape or form to conform to our practices.

Just about everything about that place had us scratching our heads and wondering… “Why would somebody build an office this small??? Why are there so damn many bathrooms??? Two different game rooms right next to each other???” Why is this hallway large enough to drive a semi through it???"

It really makes me wonder how much of a tizzy AMC went into trying to jam everything AMC into all those Kerasotes and Loews Theatres. Whenever I see chains swapping theatres it makes me smile to think of them all rolling their eyes and wondering “How the hell did they run this place like this!?!?”

From Scott Neff’s description this sounds like a bit of a Frankentheater. Part of the oddness is probably the result of Century’s addition of three screens to the original 12-screen multiplex. The addition was designed by Century’s favored architects of the period, the San Diego firm Fehlman LaBarre.

Fehlman LaBarre closed in 2010. Partner Mark Fehlman retired from architecture to pursue a career as an artist, and partner Michael LaBarre merged his practice with San Diego firm Carrier Johnson + CULTURE. The domain name of their web site was allowed to lapse and now belongs to a spam site, so avoid it. While information about the theaters the firm designed is no longer available there, Reed Construction Data provides this web page with a very brief description of the project.

December 7th, 2001 grand opening ad as the Krikorian The River Theatres in the photo section.

The River at Rancho Mirage

August 13th, 2004 grand opening ad for the extension in the photo section.