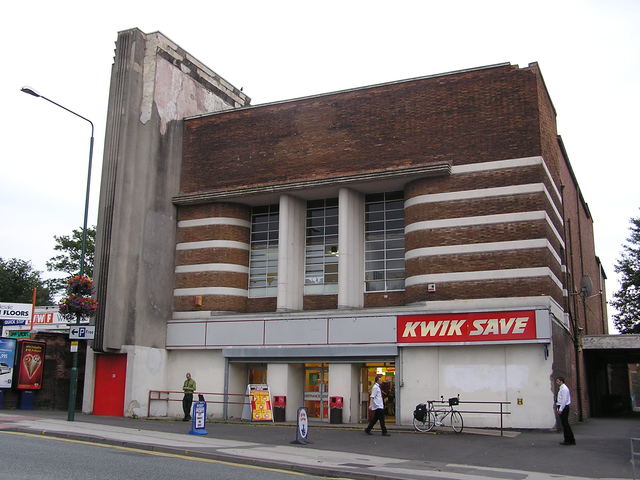 Located in the Sherwood district of Nottingham at the top of the hill on Mansfield Road at the corner of Elmswood Gardens. The Metropole Cinema was an outstanding suburban cinema. It opened on 3rd August 1937 with Fred McMurray in “Champagne Waltz” and Marsha Hunt in “Accused Finger”.

A striking feature of the exterior was a slender fin tower on the left of the building which had the name ‘Metropole’ across the top. This could be seen for miles around. Inside the auditorium seating was provided in stalls and circle areas. The proscenium was 60 feet wide, and the stage 18 feet deep.

Initially it was independently operated by W. Wooley & T. Wright, who operated the Goldsmith Street Cinema. The Metropole Cinema was taken over by the Associated British Cinemas(ABC) chain in 1943.

Closed by ABC on 27th October 1973 with Malcolm McDowell in “O Lucky Man”. It was leased to the Star Cinemas chain who converted it into a Star Bingo Club. Closed as an EMI Bingo Club in 1979.

The interior was stripped out and it was converted into a supermarket. Last used as a Kwik Save Supermarket, it was closed around 2004, and the building was demolished in 2006. A Somerfield supermarket was built on the site, which in 2012 operated as a Co-Operative Food Store.

This was where I had my first colour experience! The film was ‘The Wizard of Oz’ and the transformation from monochrome to full colour was mind-blowing. I had never seen a colour film before that! The location shown on the map is miles out; but the text is correct.

I did a holiday management relief there… 1973… The central heating system was odd The boiler ran on fine coal powder blown into the boiler. ABC still used coal there because the cinema was in a coal mining area.. The cinema had just been repainted Best described as Bingo vile Hmm soon after it became Bingo..

I was seven years old,it was May 1968.my Dad & Brother took me to see 2001:A Space Odyssey here.it changed my life,to this day it`s still my all time fave film.