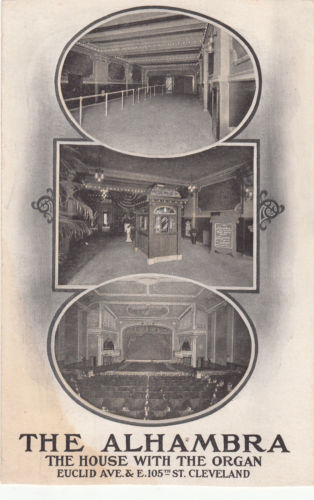 The Alhambra Theatre opened around the turn of the 20th century. It was a vaudeville house which later began screening films, then switched over to film altogether. Bob Hope attended vaudeville shows here with his mother while living in this neighborhood of Cleveland as a boy.

The Alhambra Theatre has long since been demolished.

Chuck: The Alhambra was definitely open later than 1955. It may have closed for a time in 1955, but I know for a fact that it was up and running in 1957, 58 and 59. Those were pretty bad years for all of the theatres in the 105 & Euclid area. The Kieth’s 105th Street closed down at least twice during that period, as did the Circle. I think the Park and the University both stayed open at least into 1959, but I wouldn’t swear to it.

I remember seeing it in the Press and Plain Dealer movie directories in the mid 1960s – it was always at the head of the alphabetical listing.

Here is a 1976 photo. The theater looks shabby:
http://tinyurl.com/gejqs

Here is the other side, on the same date:
http://tinyurl.com/grjjm

I read in Gary Marmorstein’s book about movie music — “Hollywood Rhapsody” — that in 1907 movie theatre impresario Mitchell Mark “…installed the first church organ to be used for the movies at Cleveland’s Alhambra Theater.”

Some very old pictures of the interior of the Alhambra:
View link

Another Loews way back then, interesting.

An article on Cleveland movie houses in the July 5, 1916, issue of The Moving Picture World has a few lines about the Alhambra Theatre:[quote]“One of the largest and prettiest theaters in Cleveland, built originally for pictures, is the Alhambra, at Euclid avenue and East 105th street. The house now seats 1,100 and during the summer a balcony with 400 seats is to be added. The house was built five years ago.

“Jack Greenbaum, manager since the Alhambra-Doan Company took over the theater, fourteen months ago, originated the "children’s matinee” idea in Cleveland. Special programs for children are shown every Saturday. School teachers aid Greenbaum in the selection of the pictures for the children.“[/quote]The line claiming that the Alhambra ”…was built five yeas ago" (about 1911, then) contradicts the citation from Gary Marmorstein’s book in Bob Beecher’s comment on Mar 26, 2007, saying that an organ was installed in the Alhambra by Mitchell Mark in 1907. Not knowing Marmorstein’s source for the earlier date, I can’t say which is correct, but the 1916 magazine’s article might have been hastily written and thus would be more prone to error.

The Alhambra Theatre was built in 1911, and was designed and built by George Allen Grieble.

Grieble began his career as a builder prior to studying architecture with the International Correspondence School. An advertisement for the school that appeared in magazines in the early 1920s featured a biography of Grieble, giving the highlights of his career. It mentioned two 1911 projects he designed and built: the Alhambra Theatre and the Penn Square Building. The Penn Square Building was an office block that also contained the Penn Square Theatre.

A biography of Grieble from the Cleveland Landmarks Commission lists two other Cleveland theaters he designed: the Olympia and the Gordon Square.