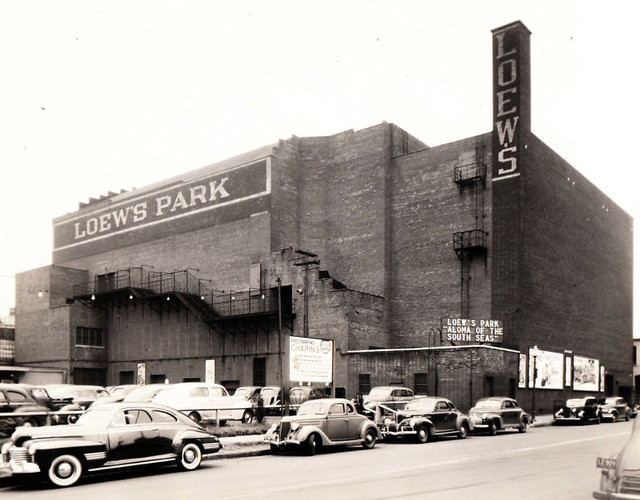 Located on the north side of Euclid Avenue between East 104th and East 105th Streets, the Loew’s Park Theatre was slightly newer than their State Theatre and Ohio Theatre in downtown Cleveland.

I never knew the details about it and had only seen it in its last few years, closed. The lobby was being used for retail, and the huge auditorium section of the building loomed in the background, it looked abandoned. It was the ‘sister’ theatre to the Loew’s Granada Theatre, on the west side of town. It was demolished about 1979 or 1980.

I’d like to hear more about it if anyone has any information.

It was huge for a theatre so far from downtown. Typical Lamb design but in my list of top 10 most decayed theatres. Rain had washed so much plaster away that the basement filled up about 4 feet deep with the plaster dust, which set up and looked and felt like a level concrete floor. The ventilation penthouse had a wood floor that was too rotted to walk on, especially knowing it was a huge drop to the ceiling below if it let go. I have a couple of box seats that survived a fire and salvaged the marble from the lower steps of the grand staircase as part of a contents purchase form the church that still owned it. It did not get any later remodelling that many Lamb theatres got and the flower well was still open under the balcony to the seating below. We had to bring in a generater and several thousannd watts of lighting to get pictures.

One has to remember though that there was a time in the late 1920’s and 1930’s that the 105th and Euclid area was almost a second downtown with two Lamb theaters (Keith’s 105th almost across the street) and four or five smaller theaters adjacent to upscale stores and fashionable restaurants. But by the late 1950’s and after, the area became very down at heel and even dangerous. Looking at the area today, it is hard to imagine how trendy and bustling it once was as a businesss and entertainment district as newer and bland office and hospital buildings have replaced what was once a very urban main street.

There were multiple attempts around the country to have a second downtown. The area by the Fox St Louis, by the Fisher Building in Detroit. Usually it was where multiple streetcar lines split away from a main intersection a distance from downtown. Huge downtown department type stores usually did not develop, so retail was less dense. Loew’s Park became a loosing proposition and ceased to show movies much earlier than other theatres and became a church, with a very interesting lot of stories about it. That is why there was so little remodeling that was normal for theatres with even fair grosses. The lobby outlasted the theatre as a store for several years and was the least real estate needed to access the huge theatre in the middle of the block.

As noted in the introduction, Loew’s Park had a sister theater in the Loew’s Granada on Cleveland’s west side (sister in the sense that they usually played the same features at the same time; architecturally, they were were very different). The Park indeed became a losing proposition, especially given its size. When the Park opened in 1921, vaudeville was still going strong, and the large size probably would have seemed viable and appropriate. But by 1927, when the Granada opened, vaudeville was in definite decline. The Granada lasted almost twenty years longer than the Park as the surrounding neighborhood did not decline as rapidly, and with over a thousand less seats, the theater was able to remain profitable longer.

Does anyone know when the Park ended as a theater? I dont remember seeing ads for it in the 60s papers, but I was a child back then, so could have missed it……

Mike Rivest’s list says 1957, which I would think is probably correct. I too grew up in Cleveland in the 1950s-60s at that time, and my mother always referred to it in the past tense. If the Rivest information is correct, Loew’s gave it up in 1953, probably as a result of the Consent Decree. Then too, so many theaters in Cleveland, as elsewhere, were killed by television at that time.

I have finally found a picture of the Park in 1956 (it also shows the Alhambra) in the digital collection of the Cleveland Public Library: View link

There are tools and a slider that will enable the viewer to enlarge and then scan left to get a better view.
Considering how large and grand this theater was, that marquee almost makes it look like a neighborhood house.

So that explains why I never saw ads for it. It was long gone. Thanks for that info.

I was wondering if anyone has any pictures of the Loews Park Theatre. I am writing a book of Ghost stories. Please contact me. Thanks