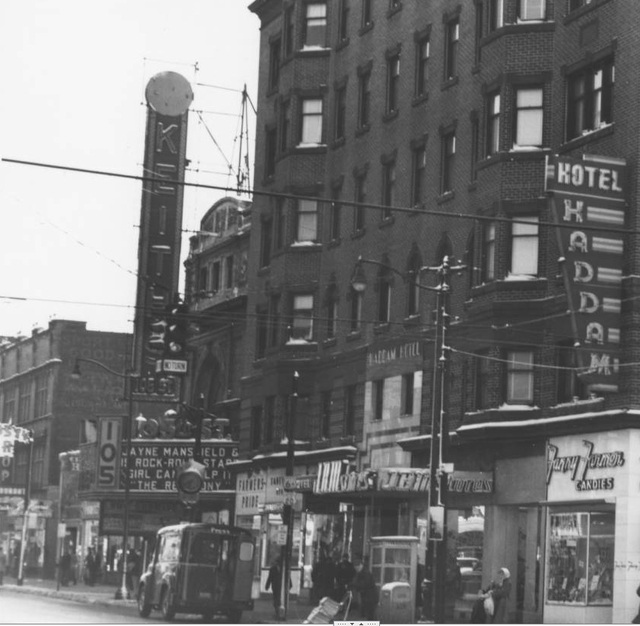 The B.F. Keith’s East 105th Street Theatre was opened on November 24, 1921. It was equipped with an Austin 3 manul 34 ranks organ. It was another uptown theatre that had done well up until the mid-1960’s, when it closed.

The theatre remained vacant for many years afterward until it was torn down in 1982 to make way for the William O. Walker Center.

What’s the theater farther down the street, do you know?

The B.F. Keith’s 105th St. Theatre opened on 24th November 1924 with Mr E. F. Albee head of the Keith circuit in attendance. It had a capacity of 3,000 seats on two floors with a row of boxes arranged in a horse-shoe fashion at what would have been a mezanine level.

The architect for this theatre should be Rapp & Rapp, per records in the Theatre Society of America. The horseshoe boxes were a feature of many of the big Rapp & Rapp theatres. Thomas Lamb was the architect for Loew’s Park, a block down at 103rd and Euclid. It was similar in size and was built around the same time (1922).

The following source backs up Fred:

The building of six theatres is in contemplation in Cleveland An office building and theatre on Euclid avenue and East Seventeenth street for J Laronge Company will cost about $2.500 000 DR Hanna is having plans prepared by CA Platt New York for a $750000 theatre on East Fourteenth street and Prospect avenue Hoffman Brothers have bought a site at 10210 Euclid avenue and will erect a four story theatre costing about $250,000 Rapp & Rapp Chicago are preparing plans for a five story theatre at East 105th street and Euclid avenue for the Pauled Realty Company to cost about $400.000 CH Crane and EG Kiehler Detroit are preparing plans for a $1.000 000 office building and theatre on Euclid avenue for the Allen Theatre enterprises Stone; an Illustrated Magazine

In the summer of 1972 or 1973 I helped remove the projectors and pedestals from the pidgeon infested booth of the theater (while the Live Show/Porn was running on a small stage and screen in the lobby area). The pedestals which were Heavy Duty Simplex models, ended up in the booth at the Cleveland Museum of Art’s Gaertner Auditorium, prior to the recent remodeling. It was 10 flights up to the booth and about a 30 degree down slant to the screen.

Winston Willis gave myself and several friends a quick tour when he had it. The auditorium had lots of restaurant and business equipment in storage from a used fixture business he ran. Very little of the lighting worked and some of the stairways were nearly filled with inventory as well. He was and is a very interesting person who was truly wronged by the big shots of the era.

This should probably be entered as Keith’s 105th Street Theatre, rather than the RKO Keith’s 105th Street Theatre (though that should be an AKA). I do not know when RKO gave it up, but I would guess it would have been about the same time they gave up the Palace in the early 1950’s, possibly in connection with the Consent Decree. I grew up in Cleveland in the 1950’s and 1960’s and it was always referred to then as Keith’s 105th, not the RKO Keith’s. It certainly was not under RKO management when it closed.

November 20th, 1921 pre opening ad is in the photo section for this theatre.