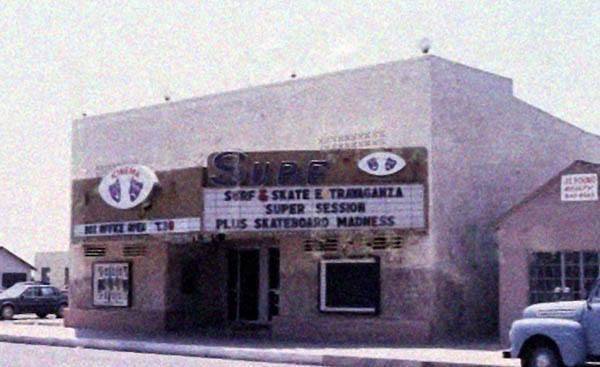 Here is an item from Boxoffice magazine, January 1938:

Having recently acquired Scott’s Theater, Huntington Beach, Mason Siler has changed its name to the Roxie. The house has been closed for several weeks getting a new marquee, seats, drapes, carpets and other equipment.

The entire stretch of Fifth Street from the beach to the 200 block is now part of some megadevelopment.

I grew up in HB during the 50’s ad 60’s. We used to go to the Surf Theater every Saturday to watch westerns, Abbott and Costello movies, godzilla, and every B movie that hollywood made. The owner would play games with us inbetween movies. Throw candy, frizbees etc out to the audience. We had a blast. Afterwards we would go over to my dad’s drug store, Waite’s Main Drug and have hamburgers and ice cream at the counter. Hb was a great place to grow up. Lived at the beach during our teen years and now paying for it with my dermatoligists.

Dear mw8. I was there in the 50’s and 60’s as well. LOVED IT! It was a wonderful part of my childhood! I loved the intermission and the fun and games. Don’t forget the talent shows! Kids would get up on stage and mostly sing, but other talents would jump up from the audience as well. I remember a friend got up and sang a song. I was so proud of her. I remember Wait’s Main Drug – AND the ice cream. Yes, Huntington Beach was a wonderful place to grow up! I moved away in 1972 and have dreamed of the beach just about every day. Will be taking a trip to see it in September.

I grew up in HB during the 60’s and visited the Suff Theater many times as a kid. In those days the Surf had a PAL Club you could join where you would get admission, popcorn and a grab bag of goodies for about $.50 on Saturday, if I recall correctly. You also got in free on your birthday!

The Surf played a double-feature kids movies on Saturday – I saw everything that Disney produced and my parents were grateful that kids had a safe place to go while they got a break! Between shows there was entertainment and Surf owners would toss prizes and snacks to the kids in the audience. It was great fun. After the shows we would often walk down to the pier and have ‘strips’ from beach vendors.

I lived in HB between 1960 and 1976 and have a lot of find memories growing up in ‘old’ Huntington Beach!

WoW! It’s great to read all the comments about The Surf! My name is Tracy Thomas, my father owned & operated The Surf Theatre from 1961 until it was demolished 1989, for the “new” downtown re-vamping. It’s fun to visit old memories which include; Saturday Pal-Club matinees, March of Dimes fundraisers, surf & ski movies- which showed 2x a nite, (7:30 & 9:30 with lines around the building!). The shenanigans I participated in by letting the ‘locals’ in free. Eating at; Mazzotti’s, Whimpy’s, The DogFather and of course, The Sugar Shack. Great Memories! My Dad passed away suddenly on August 4, 2007- he was 66 yrs old.

PS: The Surf should be listed as ‘demolished’, and the seat capacity was more like- 356. My Dad had taken rows of chairs out so there was more leg room between isles, and reconstructed the stage area in front of the screen. The 600+ number is incorrect. Tracy Thomas Morehead, daughter of owner.

My grandfather, Lowell Robbins, owned the Surf during the late 1920s. He always called it the Surf and he sold it before 1941 when it was supposedly renamed. Unfortunately, he died thirty years ago, so I can’t clear it up as to when this theater changed its name.