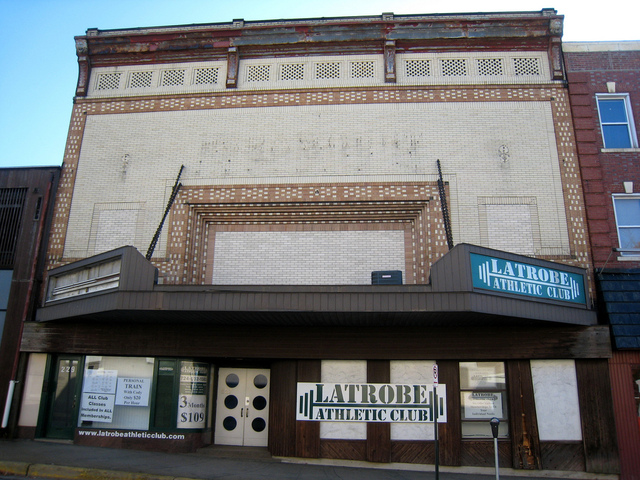 The Paramount Theatre was opened on July 8, 1916 with Marguerite Clark in “Still Waters”. It was taken over by Manos Theaters and following a remodel and refurbishment reopened as the Mano Theatre on November 30, 1936 with Irene Dunne in “Theodora Goes Wild”. It was closed in 1979. In the 2000/2010’s the Latrobe Athletic Club occupied this former theatre.

In January 2016 plans were announced to convert the Manos Theatre into a live theatre to be known as the Cabaret Theatre.

“Latrobe, Pa. — Mike Manos, president of Manos Enterprises, which recently acquired the Temple and Chase Street Theaters in Kane, announces the purchase of all holdings of the Indiana County Theater Co., including the Paramount and Olympic here, the lease on the local Grand, the Richelieu at Blairsville, the Casino and the Arcadia at Vandergrift and the Empire at Homer City.”

From its appearance in the photo above, and from the satellite view at Google Maps, I suspect that the Manos Theatre was the former Paramount, which opened around the beginning of August, 1916, according to the report in the August 5 issue of The Moving Picture World:

“The new Paramount theater was thrown open to the public of Latrobe, Pa., several days ago, and made a splendid impression. The house, which is owned by Peter Lampropolis, is said to be the finest between Pittsburgh and Johnstown. It is up-to-date in every way and has a seating capacity of 1,000, including a spacious balcony. The building itself measures 100 by 50 feet and and is of fireproof construction throughout. The exterior is quite attractive, while the interior combines the highest degree of good taste and comfort. Entrance to the auditorium is had from a well-arranged lobby, from each end of which wide stairways lead to the balcony seating 480 persons. The main floor of the auditorium has 520 seats, with wide aisles.”

Issues of The American Contractor from late 1915 carry notices about the Lampropolis theater project in Latrobe, and name the architect as M. Nirdlinger. Maximilian Nirdlinger also designed the Kenyon Opera House in Pittsburgh and a 1921 theater project in Johnstown, Pennsylvania, that I’ve not yet been able to identify.

A 1938 advertisement for the Manos circuit’s theaters in Latrobe names them as the Manos, the Grand, and the Olympic, so the Paramount must have been the one that had been renamed Manos by that year.

I have some news for this building. It will now become a live Theater for Live performances brought to you by the American Performing Arts Theatre Company and The Cabaret Theatre. It will be known as “The Cabaret Theatre.” On behalf of the “Cabaret” I would like to thank this site for supplying some history of the building. It has been helpful and we will post more information as we learn more of the building’s rich history.

It and the Grand theatres had a soft opening on October 28th, 1936 and official openings on November 30th, 1936. Ads in the photo section.