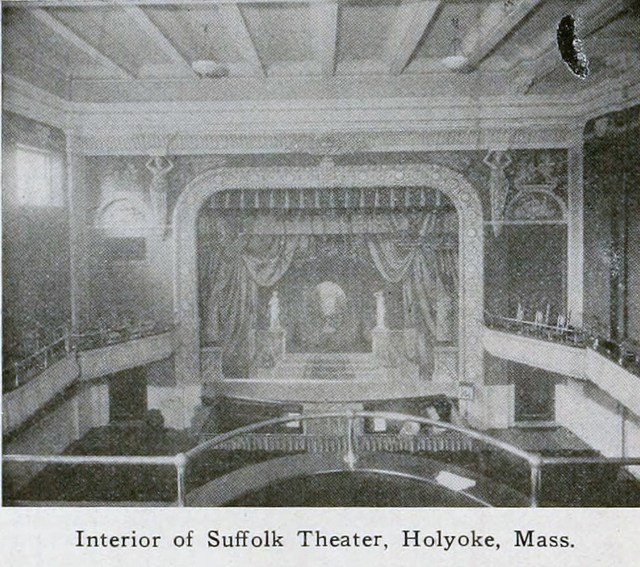 Opened around 1912, the Suffolk Theatre was operated for years by Herman Rifkin Theaters as a first-run movie house. In the days when theatres in smaller cities "split" film product by studios, the Suffolk Theatre ran the films released by Universal, Columbia, United Artists and Monogram.

The Suffolk Theatre was located at 11 Suffolk Street and it seated 880 people.

The MGM Theatre Photograph and Report form for the Suffolk Theatre at 11 Suffolk St. in Holyoke has an exterior photo dated March 1941. The theatre’s entrance was on a corner and it had a small but elaborate marquee. Attractions are Charlie Chaplin in “The Great Dictator”, plus a “Co-Hit!”. The Report states that the Suffolk is not playing MGM product, that it is over 20 years old; that it’s in Fair condition, and has 620 seats on the main floor and 300 in the balcony, total: 920 seats. Competing theaters are listed as Strand, Victory, Globe, Bijou, Majestic and Holyoke. The theatre entrance was located at the corner of a large commercial building.

In Lost’s 1986 photo, the Suffolk Th. looks the same as in the photo taken in March 1941 for the MGM Theatre Report. Even the marquee appears to be the same.

the Suffolk is listed in the 1927 Film Daily Yearbook as having 1100 seats and open daily.

The Saturday, November 8, 1913, issue of The Moving Picture World had this item about the Suffolk Theatre: “Charlie Higginbotham opened his beautiful new photoplay theater at Holyoke, Mass., last Monday, to a crowded house. The new Suffolk Theater is the name and the theater is distinctly superior to most in every way. It is fireproof and modern. Vaudeville and pictures form the programs.”

I was the last manager of the Suffolk, just before it closed forever in September 1968. The last film to play here was Disney’s"Bullwhip Griffin.“ At that time the Suffolk operated Friday evenings and continuous all day Saturday and Sunday. The rest of the week it was closed. The theatre was still doing an excellent weekend business, especially on Sunday afternoons, albeit attracting a rather rough crowd. One of the most significant factors in its demise was that the theatre had to close from Memorial Day thru Labor each year, after the air conditioning plant quit some years earlier. Sam Goldstein (Western Mass Theatres, Inc.) who was operating the theatre at that time refused to spend the money to repair it.

In the early thru mid 60s, the Suffolk regularly sold out on Sunday matinees (main floor and balcony) with double feature programs of action, horror (mainly Hammer and A.I.P.)and low-budget science-fiction, along with occasional second-run double bills of “A pictures” which previously had been shown first run at either the Victory or the Strand.

At this time, matinee prices were 50 cents for adults and 20 cents for kids under 12. Popcorn could be had for 10 cents a bag or 15 cents a box (plain, no butter) at the refreshment counter. Candy was a nickel on the bottom shelf and a dime on the top shelf of the display case There was a vending machine in the inner lobby at which soft drinks could be purchased for a dime a cup.

For a time in the mid 60s, the Suffolk’s screen had a bed sheet in its middle, patching a large hole caused by an “enthusiastic” audience member throwing an empty Coke bottle thru it! Sam Goldstein did rectify this glaring defect ultimately; however it was well over a year before this was done.

All-in-all, a rather ignominious final chapter for a once beautiful little house, which had been the first-run showcase for United Artists, Columbia and Universal product during the 1930s and 1940s. Everything from “lost Horizon”, “Mr. Smith Goes to Washington” and “His Girl Friday” premiered there, along with the first-runs of the Universal horror classics of the 30s and 40s.