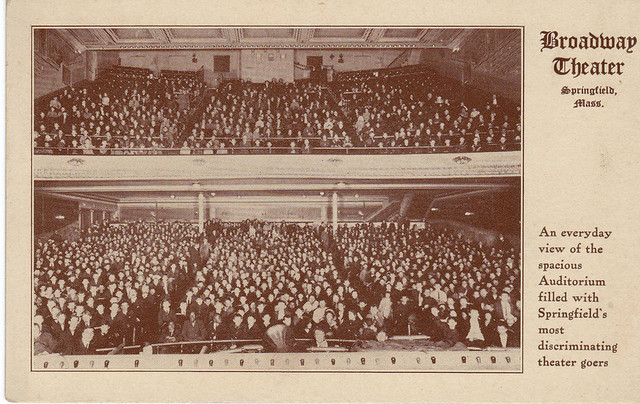 The Broadway Theater was opened on April 28, 1913 with the comedy play “Green Stockings”. It housed the Home Offices of Western Mass Theatres Inc. (Samuel and Nathan Goldstein) until early in the 1940’s. (The Offices were located directly adjacent to the theater’s balcony.)

Together with the Arcade Theatre and the Paramount Theatre, the Broadway Theater comprised Western Mass Theatres' holdings in downtown Springfield.

The Broadway Theater was knocked down in the 1950’s.

The Broadway Theater opened in 1913, the same year as the Poli Palace, at 161 Bridge St. It was a vaudeville, then later, legitimate playhouse equal to the Court Square Theater. It’s exterior had a small marquee and it’s roof boasted it’s name that lit up at night. It stood directly across from the Hotel Bridgeway.
It’s interior lobby had both stairs as well as an escaltor to take patrons up to the balcony. This escalator was the only one of it’s kind in this region.
The theater’s interior was styled in a Greek architecture decor with a large prosenium arch above the stage/screen. The main floor had 1,800 seats and the balcony and loges totaled 1,100. A very large and ornate movie palace. By the 1950’s, time and lack of vision took it’s toll. Prior to closing in 1952, it was being used for wrestling events. In Sept, 1953, The Broadway and adjacent buisnesses was torn down so a parking lot on the corner of Columbus Ave could expand up Bridge St, another victim to the parking lot mentality of the time.
This entire area of Bridge St was razed in the late ‘60’s for I-91 to come through.

I recall that the marqee was very plain. It basically was an overhang with lettering indicating the attractions only on the left side. Looked unbalanced. This was due to the fact that Bridge St. was one-way traveling west.

The Broadway Th. in Springfield is listed in the 1942-43 edition of the Motion Picture Almanac as being run by Western Massachusetts Theatres (Nathan Goldstein) whose address is given as 101 Bridge Street in Springfield. Their 2 other theatres in Springfield at that time were the Arcade and the Paramount.

The Broadway is listed in the 1927 Film Daily Yearbook as having 2200 seats and open daily.