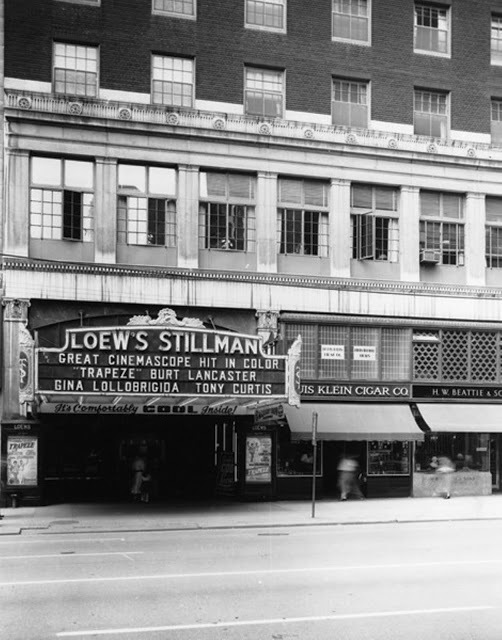 The Stillman Theatre was built on the site of the 19th Century Stillman Hotel, which was razed in 1902. It opened on September 29, 1916, and was the first true movie palace in Cleveland, one of the largest and most luxurious theatres ever built in Cleveland (or anywhere in the Midwest for that matter) at that time. It was equipped with an Austin pipe organ which had a 3 manual console and 35 ranks.

In the late-1950’s, in a bid to increase declining audiences due to television, Loew’s had the Super Technirama 70 process installed at Loew’s Stillman Theatre.

However, in 1963, the theatre was closed, and in 1965, most of the theatre was demolished and replaced by a parking garage for the neighboring Statler Arms Apartments (the former Statler Hotel, which has been spectacularly restored to its 1920’s appearance).

Thanks CWallczac I love these pictures.Got any of the exterior?

@Archie: The department stores did not close “year by year”. Taylor’s closed in ‘61. Bailey relocated to the old Bing Furniture store and lasted until '66. Sterling’s lasted until '68. Halle’s 'til the end of '81, and so forth.

Tlsloews,hard as I try every LOEWS theatre I find you have left a comment before me!

TLSLOEWS uploaded two pictures of the exterior from a site called Franks Place.

The Stillman Theatre had an Austin Pipe Organ of 3 manuals and 35 ranks! Quite a large instrument!

Marcus Loew acquired the Stillman in 1917, according to the September 1 issue of The Moving Picture World that year. The chain acquired to Valentine Theatre in Toledo at the same time. The pair were the first Loew’s houses in Ohio.