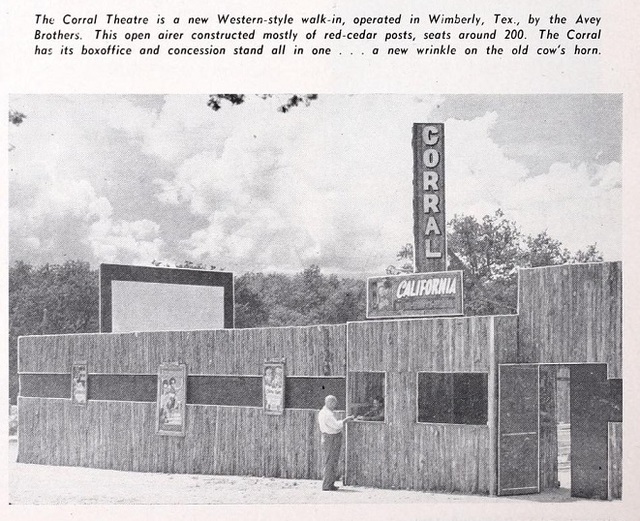 Built in the late-1940’s, the Corral Theatre is located in downtown Wimberley. The Corral was built like a stockade of cedar saplings.

In 1966, the theater moved to Rocky River Ranch, lock stock and barrel to its present location. It’s still going strong during the spring and summer months.

There’s an article in the February 2, 1952, issue of Boxoffice Magazine about a Corral Theatre that was located near the Fort Worth, Texas, suburb of Forest Hills. It says that this open air walk-in theatre had recently been completed by owner J.C. Wilson, to replace his Forest Theatre which had burned the previous year.

A couple of photos show rough plank walls and wooden bench seating, and a “chuck wagon” that served as the concession stand, located near the screen. I can’t find anything else about it on the Internet, but it must have been built in imitation of this theater in Wimberly.

Here are some photos taken in the mid 70’s. And then a newer set taken Aug 06. The in summer of 06, the carbon lamps had been removed and xenon installed, reverse scan in the sound heads and zipper type change overs added. Sound is still mono. Reverse scan was for the newer cyan tracks.

This past weekend they were showing UP and the place was packed. The night I was there in o6, Nacho Libre was being shown and it was pretty full that night as well.