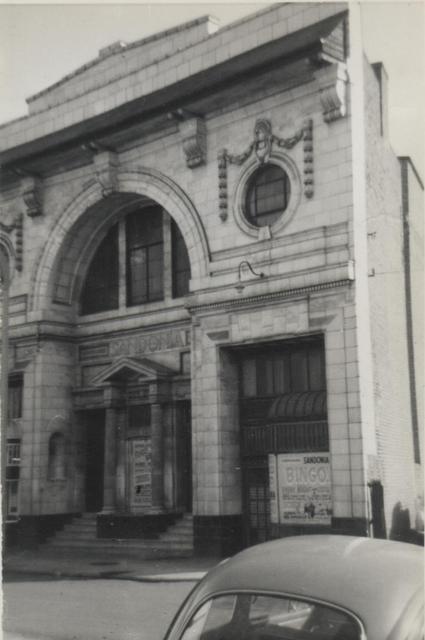 Located quite a distance away to the north of Stafford town centre. The Sandonia Kinema & Theatre was opened on 20th November 1920 with a stage production of “Chu Chin Chow”. The first film to be screened was Leslie Henson in “Alf’s Button” on 27th November 1920.

The façade of the building is attractively decorated in white stone, with the name ‘Sandonia’ in the stonework over the entrance. Inside the extremely long and narrow auditorium, seating was located in stalls and circle levels. The cinema had a fully equipped stage, complete with a large fly tower for scenery. The distance from the projection box to the screen was a 110 feet throw.

Unfortunately, the Sandonia Cinema was not a great success, and it was closed in early-1923. It was sold to Walter Goodall, and re-opened on 5th March 1923 with “Anton Stewart in "Plaything of Destiny” and Al. St. John in “Village Sheik”.

In 1930, it became part of the small local Stafford Entertainments Ltd. chain. The last silent film to be screened was “The Silent House” on 16th August 1930. A BTH sound system was installed and the first talkie was Janet Gaynor in “Sunny Side Up” on 18th August 1930.

The Sandonia Cinema was equipped with CinemaScope on 8th June 1957 when Robert Wagner in “Between Heaven and Hell” became the first film in this process to be screened at the cinema. The Sandonia Cinema was closed on 26th September 1963 with Sophia Loren in “Madame” and Kent Taylor in “The Day Mars Invaded Earth”.

The building was sold to a Wolverhampton company who re-opened it as an independent bingo club. Later operated as a Coral Bingo Club, bingo ceased in 1990, and it became a snooker club. The projectors were removed from the building in 1991 and sold to a private collector. The snooker club operated until the early-2000’s. Since then, it has stood empty and unused.

Under imminent threat of demolition once planning is accepted.