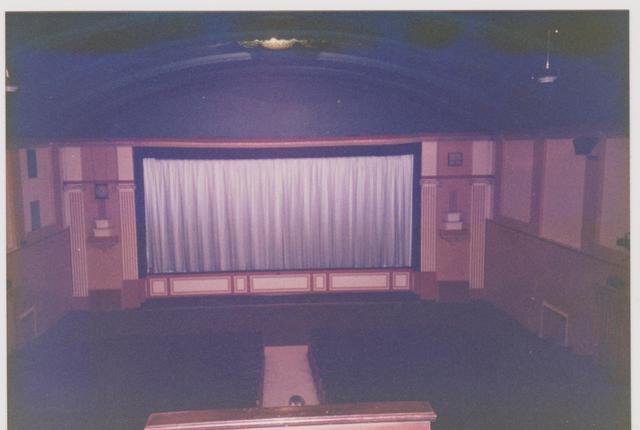 Built for local independent exhibitor Walter Goodall, the Picture House opened on 23rd February 1914 with "The House of Temperley".

Blending in with the historic town, the façade has a centrally located gable decorated in Tudor style half-timber beams in black and white. There is a decorative wrought iron canopy which has stained glass letters spelling out the name ‘Picture House’. The original ticket office remained in use throughout its life and is still there today. There was another ticket office down the side of the building which served customers in the front stalls seating, and this remained in use until the last few years of the cinema’s operation.

Inside the auditorium, seating was arranged on a stadium plan, with a raised stepped section at the rear. There is a barrel vaulted ceiling which has decorative bands of plaster. In August 1917 a French built Reed Organ de Luxe Mustel ‘Celesta’ Concert organ was installed and opened by Birmingham organist Mr C.W. Perkins. The Picture House was equipped for ‘talkies and the first to be shown here was "The Last of Mrs Chaney" starring Norma Shearer on 19th April 1930. In July 1930 the Everston family purchased the Picture House and they operated it for the remainder of its cinematic life.

The town of Stafford only had one circuit owned cinema, the Odeon (now the Apollo Cinema), and the Picture House usually played the ABC release or had a choice of independent releases. It had a new proscenium opening installed in June 1955 when CinemaScope was fitted. Otherwise, the building retained it character through the years. In 1989, the Picture House was designated a Grade II Listed building by English Heritage.

The Picture House was closed on 30th March 1995 after a 3-weeks run of "Disclosure" starring Michael Douglas. There were 78 attending the final performance.

It had been purchased by the J.D. Wetherspoon chain of pubs and after planning permission was approved, was converted into the Picture House pub which opened 6th March 1997. In November 2012, the Picture House was equipped with a HD projection screen and began to screen films from the 1960’s and 1970’s on Wednesday evenings, and classic black & white films on Sunday evenings. Admission is free, and of course you can always have a pint or two of beer and a meal.

photo circa 1992 when it was still an independent cinema, it was like stepping back in time to the 1940’s, the lobby area was almost unchanged with original glass cabinets for the sweets
http://flickr.com/photos/woody1969/2120693345/

The interior not as sharp as the pub view but shows the cinema in April, 1989