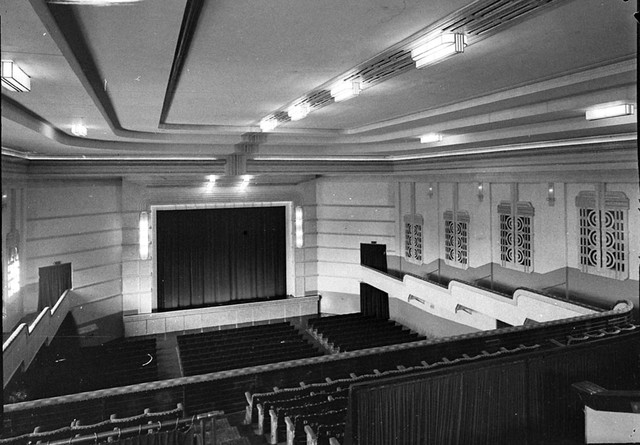 Located in the north Sydney suburb of Willoughby at the corner of Willoughby Road and Mowbray Road. Built in 1915 as the Willoughby Picture Theatre, it was demolished and rebuilt in 1921. Rebuilt in the 1930’s in Art Deco style designed by the architectural firm Crick & Furse, it was re-named the Royal Theatre.

Independently operated, it was closed in the 1950’s and demolished. A gas station now occupies the lot.

The Royal Theatre was located on the corner of Willoughby Road and Mowbray Road, Willoughby (not Penkivil Steet).

The address is definitely Mowbray Road and Willoughby Road, opposite the Willoughby Girls School. Identified as 684 Willoughby Road on Google Earth and a United gas station occupies the site.

In the 1940’s I remembered this Theatre being called “The Dreadnought” as distinct from a much earlier theatre by the same name in Chatswood. We always said we were going to “The Dreddie”. Can anyone confirm this?

yes the royal closed in 1958 after the then leasee purchased the North Willoughby Hoyts and renamed it Gothic after the Queens yacht the Royal and Gothic actually ran concurrently for a week the Royal then finally closing and in a state of disrepair for the last time PS It was never called the Dreadnought this was the former name of the Hoyts Esquire Chatswood .au