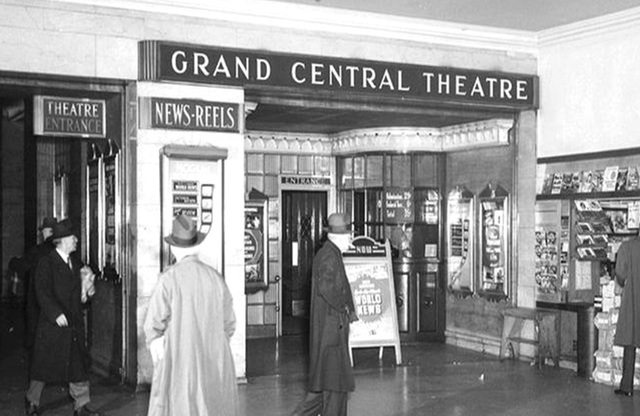 This little Art Moderne-style newsreel theatre operated inside the vast Grand Central Terminal from its opening on May 3, 1937 until about three decades later, when the space was gutted for retail use. The theatre also screened cartoons and short subjects. A large incandescent clock to the right of the screen reminded theatre-goers of the time. At the rear of the auditorium was a standing-room section, and a small bar was located near the theatre’s entrance.

It was located near track 17 and today the area is used as a wine shop, complete with the beautifully restored star-covered ceiling of the former theatre’s lobby.

When I was a regular customer in the early ‘50s, they changed the program twice a week (to run current news in that pre-TV era). Since the change-over came in the middle of the day, and if you timed it right, you could catch two programs (a two-hour show) for a single admission ($1).

Some other newsreel and short subject cinemas located in train stations:

Hi Joe Clark & my other theater enthusiast friends!!! Every so often, you can find a Grand Central Theatre postcard on Ebay.

Though it won’t really map properly, I believe the address should be listed as 33 Grand Central Terminal (Main Concourse, opposite Track 17), New York, NY 10017.

a short video of people going into the grand central theater is on the video VHS titled: “The winning of world war 2” “The road to victory – ratling the saber” 1990 mbi/ulanoff distributed by publishers choice videos. hosted with personal commentary by John s. d. elsenhower. I own this video.

The April 1, 1937, issue of Motion Picture Daily said that the opening of the newsreel theater being built inside Grand Central Station had been set for May 3.

I passed by it many times but never went in. (In the early 1970’s, when I was going to college and Amtrak trains on the old New York Central lines were still leaving from Grand Central, I had to change stations in New York.) I distinctly recall that on one occasion, oe of the last times I saw the theater in operation, the program was the 1971 documentary “The Hellstrom Chronicle”, so the end must have come around 1973 or thereabouts.

Another thing: it probably was an inspiration for a strip in the comic series “Julis Knipl: Real Estate Photographer”, which takes place in such a theater.

Is the clock still there?

Is it the only theatre/cinema inside a train station?