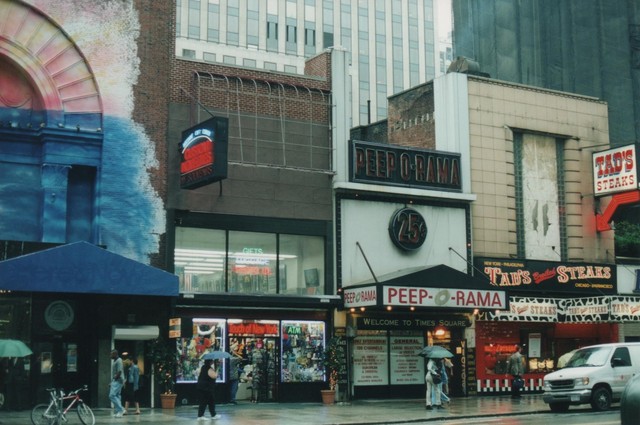 Brandt’s Pix Theatre was an exhibition site on W. 42nd Street between Broadway and 6th Avenue. It opened on December 23, 1939 with the French movie “Citadel of Silence” starring Annabella. Last operating as the Peep-O-Rama in 2005. It was demolished, together with the rest of the block in 2006 to build the new Bank of America tower.

For a short period during the late sixties-early seventies, the Pix became the third Rialto on 42nd Street. As the RIALTO EAST it premiered Argentinian soft core star Isabel Sarli’s FUEGO and later the Swedish JULIETTE DE SADE, both sold with much fanfare and New York Times full page ads.

At some point (probably the late ‘70’s or early '80’s), the Pix became known as Peep-O-Rama, home of coin operated private video booths. I’m not sure what sort of changes were made to the interior, or if movies were still exhibited on screen in the original auditorium at all.

In July of 2002, Peep-O-Rama became the very last porn establishment on 42nd Street to close. The space was taken over by the non-profit avant-garde art project known as Chashama and converted to gallery/performance space (as were several other properties on the block including the fomer Herman’s at 135 W. 42nd and former Avon-on-Love theater at 125 W. 42nd). Chashama is run by Anita Durst, daughter of Durst Organization CEO Douglas Durst. All of these properties were owned by the Durst Organization and provided free of rent to Chashama until 2004 when the lots and all adjoining parcels on 42nd and 43rd Street to 6th Avenue were sold and demolished to make way for the new Bank of America tower now under construction.

Status should be updated to “closed/demolished”

Here’s a shot of the former Pix with it’s Peep-O-Rama signange still in place. The photo is dated 12/9/2003, at which point it’s interior would have already been converted to gallery space for the Chashama art project.

I also found a night shot at the top of this Forgotten NY page also taken during the same period. The old Peep-O-Rama sign is lit up (with some broken letters) and you can clearly see through the street-level glass front at the artwork on the interior walls. If you scroll down just a bit on the Forgotten NY page, you’ll see another shot of the former Pix that is dated 1990. In this image, the space is occupied by a “42nd St. Audio and Photo,” so clearly the Peep-O-Rama must have opened sometime after 1990. I suspect that both the Audio & Photo shop and the Peep-O-Rama occupied the 25foot wide lobby space of the Pix while other use was made of the former auditorium which had a much wider frontage on West 43rd Street.

By the way, that Times article you posted about on October 15th, “A Preview of the Pix” is an interesting and informative read. Firstly, it erroneously describes the theater as having 1000 seats (as you can see from the C/O, max capacity – which may include employees for fire code – was to be 820 persons). Management intended the theater to be devoted “to the exhibition of French and other foreign pictures.” There was a fall-back plan, however, to switch to first-run Hollywood product should their initial plan prove “impracticable.” Regardless of the fare, Brandt intended to keep admissions at “popular prices.”

The theater opened on Saturday, December 23rd, 1939, with the French drama “Citadel of Silence,” produced in 1937 and starring Annabella – who had made her cinematic debut at age 16 in Abel Gance’s “Napoleon.” The designer of the Pix is listed as Ely Jacques Kahn and the theater was the first in NYC to be constructed in accordance with the “new theater building-code” to ensure the “ultimate in safety measures.” As such, the orchestra was designed with four fire exits, “two on either side of the house, leading directly into brick enclosed passageways which open onto Forty-third Street.” According to the article, the Pix was also the first theater on 42nd Street to be purpose built exclusively for motion picture exhibition.

The interior is described as “intimate” with a small loge and balcony and a color scheme that “is a blend of flame red and dubonnet” with “the upper portions of the acoustically plastered walls…decorated with white Grecian heads.” Brandt was particularly proud of the theater’s flame-red leather “body form” chairs, set in steel frames and guaranteed by Brandt not to “cause runs in milady’s sheerest hose.” The air-conditioning plant occupied most of the basement floor space and circulated fresh, refrigerated air through a network of vents in the orchestra floor. The cost to build was estimated at $300,000, on property that Brandt leased from “Freya, Inc.” for a period of only twenty-one years.

And now, I’m going to see if I can find out what on Earth the color “dubonnet” looks like!!!

Wow. Now I know what the interior of the Pix looked like AND what it tasted like!!! Thanks for the entertaining commentary, guys.

It did come to a sad end…but I can recall countless trips there in the mid & late 1950s to catch all the Joan Crawford films of the 40s, along with other Warner winners.

Rialto East and Rialto III should be added as AKA names here.

Great image, Warren. Theatre status should be “closed/demolished” as the site was incorporated into the new Bank of America office tower.

Enrolling with this link.