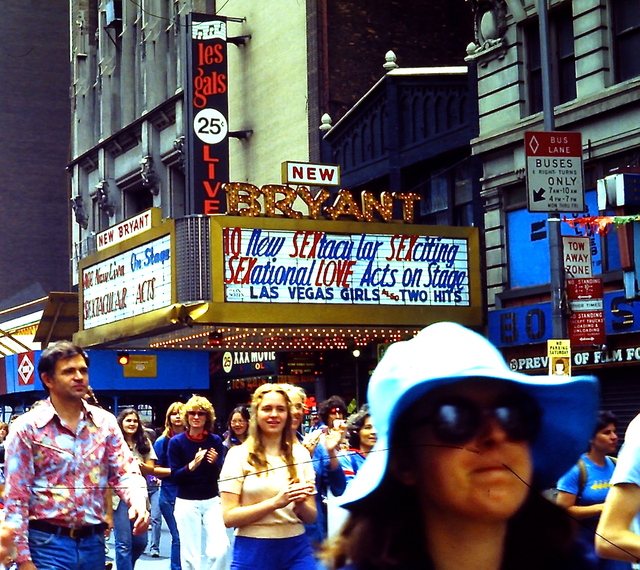 Located on W. 42nd Street between Times Square and 6th Avenue, the B.S. Moss' Cameo Theatre was opened in December 1921. Around 1942 it was renamed Bryant Theatre. In its later years frequently showed double bills of foreign films. By 1971 it was operating as an adult movie theatre. By 1980 it had been renamed New Bryant Theatre and was offering live sex acts on stage.

So I guess the Cameo was occasionally showing “adult” movies from its early days.

Here’s a NY Times review from 1934 of a movie I recently saw on TCM:

“Road to Ruin,” written and co-directed by Mrs. Wallace Reid, is a morose investigation of a high school girl’s downfall, and is intended, apparently, as a dramatized lecture to the mothers of adolescent girls rather than as a general entertainment.

With a gravity proper to the subject, the Cameo’s new film describes the circumstances under which the youthful heroine is persuaded to smoke her first cigarette and drink her first cocktail, and later traces the successive steps in her betrayal by a sleek and astonishingly unprincipled young man.

The deficiencies of “Road to Ruin” lie not so much in its amateurish composition as in its dull and unnecessary preoccupation with subject-matter which belongs in a sociological case history.

THE ROAD TO RUIN, based on a story by Mrs. Wallace Reid; with Helen Foster, Nell O'Day, Glen Boles, Paul Page, Virginia True Boardman and Richard Tucker; directed by Mrs. Reid and Melville Shyer; a Willis Kent production; released by First Division Exchange. At the Cameo

The Cameo opened during Christmas week 1921.

B.S Moss' Cameo Theatre, The Salon of the Cinema.

October 1927, program during the glamour years.

Enrolling with this link.

There is a very good possibility that the auditorium of the Bryant Theatre still exists – or at least did until very recently – within the footprint of the Bush Tower at 130 W. 42nd Street, which opened in 1918.

The 42nd Street entrance for the Cameo and Bryant, as posted above, was indeed at 138 W. 42nd and has certainly been demolished. However, as with many theaters, this entrance merely led to a narrow foyer that ran back to the auditorium, which sat on 41st Street. If it’s a fact that the Cameo opened in December of 1921, we can only assume that it was either constructed on vacant land behind the tower, which may have been owned by the Bush Terminal Company, or it might have been carved out of space in the building that had a previous use. That remains cloudy at this point.

NYC Dept of Buidling records no longer exist for the address at 138 W. 42nd, and property transfer information is limited. I was able to find a C of O issued in May of 1932, amending usage of the property listed as 130-138 W. 42nd Street & 133-139 W. 41st Street, and the description includes a Motion Picture Theatre on the 1st floor with capacity for 539 persons. This matches seating information Ken Roe posted back on October 31, 2004. The C of O also notes this is a 29 story office building, which matches the description for the Bush Tower. Further, the C of O was issued to the firm of Corbett, Harrison and McMurray, and Harvey Wiley Corbett is listed on several websites as the architect for the Bush Tower.

Additional C of O’s were issued througout the years for this lot (later known as 130-134 W. 42nd and then finally just 130 W. 42nd), in 1973, 1989, 1999 right up to 2006, and each time, the Motion Picture Theatre is still noted on 1st floor with capacity of 539. I know the building itself is landmarked – I wonder if that includes the Bryant’s auditorium? Perhaps there was some adaptive re-use that retained elements of the old place? Perhaps only a trip down to the building would answer those questions to any degree of satisfaction.

Interesting to note that property records also note that the entire Bush Tower was owned by Avon Associates Inc from 1973 until 1977 – presumably the proprieters of the Avon chain of pornographic theaters. They must have operated the Bryant for a period.

Could this have been called the Arcadia Theatre during planning stages? Here’s an article that said the Arcadia Theatre would be opening in the Bush Terminal Building at 130 W 42nd St on Labor Day in 1921. I have found no further references to the Arcadia. Maybe it changed names and had its opening pushed back a few months.

The Lafayette in Suffern, NY was an expanded version of the Cameo, complete with the same Adam ceiling. Fortunately, the Lafayette still exists.

1953 photo, Bryant Theatre marquee in the background. Scroll down.

The Avon Associates Inc (Sol Goldman and Alex DiLorenzo Jr.), which owned the building from 1973 until 1977, was not related to the Avon theatres. In fact AAI in the early/mid 1970s had one of the largest real estate portfolios in New York city, with over $1B in holdings, including the Chrysler Building. I’m sure they had a few theaters in their inventory, but IF any were also a part of the Avon chain then that was purely coincidental.