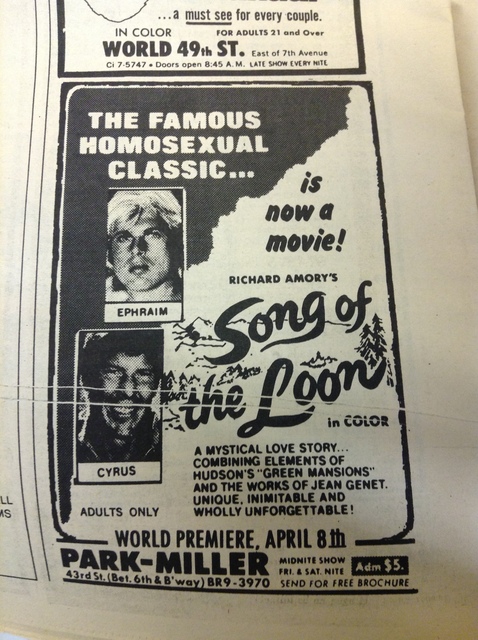 Located across W. 43rd Street from the Town Hall Theatre, actor Henry Miller opened his Georgian-style playhouse in 1918, and it was immediately hailed as one of the most beautiful and luxurious theatres to ever open on Broadway.

The 950-seat theatre was designed by H.C. Ingalls. Its two-balcony auditorium resembled more a movie palace than a traditional legitimate theatre, with plentiful use of marble, gilding, and, from its domed ceiling, a massive crystal chandelier.

The Palladian-style red-brick facade featured the theatre’s name inscribed above a trio of arched windows and a pair of huge urns set in niches above which were medallions with representations of the Greek Muses.

During its early years, Henry Miller’s Theatre had difficulty finding a hit, but by 1926, a several-month long run of Noel Coward in his self-written play, “The Vortex” became the first on the Henry Miller’s stage. 1926 was also the year Miller died, but the theatre remained in his family.

In the early-to-mid-1930’s, while many other Broadway houses were on the decline, switching to movies, burlesque or use as radio studios, Henry Miller’s Theatre began to really hit its stride.

From the 1930’s until the early-1960’s, the theatre enjoyed its golden years, and the list of actors who played on its stage is impressive: Helen Hayes, Leslie Howard, Lillian Gish, Douglas Fairbanks, and Ruth Chatterton.

In 1967, the Millers sold their playhouse to the Nederlander Organization, who, despite assurances it would continue on as a legitimate house, leased it for screening movies, beginning in 1969, with the premiere of Andy Warhol’s “Lonesome Cowboys”.

Instead, in 1978, it was reopened by Howard Stein as a disco called Xenon after a $2 million renovation. In this era it competed with Studio 54, and Jellybean Benitez was the resident DJ. Xenon was featured as a location scene in the 1981 movie “Nighthawks” staring Sylvester Stalone. After the disco closed in around 1984, it remained dark for a while, then reopened as another successful disco named Shout in the late-1980’s.

It reopened in the mid-1990’s, for a stage revival of “Cabaret”, and renamed the Kit Kat Klub, in following the 1930’s era German theme of the show. It also received a gaudy remodeling to turn its interior into something like the musical’s title venue.

After the run of “Cabaret” ended, the house was dark again for a short time, before reopening in the fall of 2001, under its original name, with the popular musical “Urinetown”.

Sadly, Henry Miller’s Theatre was closed in late-January, 2004, and was torn down in March 2004 (except for its landmarked facade). A large office tower was constructed on the site, and includes a new theatre space named Stephen Sondheim Theatre.

CWalcak, most classic theatres that operate as multiplexes today have little or nothing left of the original interior shell.

AlAlvarez: what you say is certainly true, but in the case of those multiplexes, at least the outer shell or much of it remains as well, perhaps, as the facade, and there have been many other cases where a theater’s interior has been gutted to the walls and a new theater interior built. But in the case of the Miller, the Harris, the Selwyn, and the New Yorker, all that remains of them are their front walls (albeit some very magnificent front walls), which I do not think is enough to say that that the new theaters built behind them are rebuilds or renovations. If all that is needed to preserve a theater is the survival of a wall, then there is at least a possibility perhaps one day we will have a Paramount theater back at Times Square. (Well, we can dream can’t we?)

The Harris? Is there a theater behind that front wall? I think you mean the Lyric and Apollo, which kept the 42nd and 43rd Street facades and many architectural ornamentation, but lost their roofs and everything else and were gutted to the ground; a brand-new theater was constructed on the site, much as the Miller was.

The Selwyn? That was truly a renovation, since the auditorium is intact and was extensively renovated back to its original look. The lobby did collapse during construction and was rebuilt.

I’m not familiar with the New Yorker. Care to elaborate?

I am sorry for the confusion; I was referring to the Harris and Selwyn in Chicago, not New York. The New Yorker I was referring to was in Toronto. See my comment of September 15. I was giving examples of theaters whose facades remain but have entirely new theaters behind them. Thanks for bringing up the Lyric and Apollo; they two are good examples.

Argah; I meant too, not two.

Alas, it wasn’t until Cabaret opened here, decades later, that I finally passed through these hallowed portals.

The Henry Miller Theater was also the home of one of New York’s most celebrated Disco’s “Xenon” from 1978 to 1984. Later it was the home to another popular Disco called “Shout”. Xenon was the only club to rival Studio 54 which was also housed in an old theater, the Gallo Opera House on 54th Street. Other celebrated theater Discos were Palladium (Academy of Music) on 14th Street, The Saint (Loew’s Commodore) on 2nd Avenue/6th Street, Club USA (The Forum) Broadway & 49th. They were all incredible structures and all but Studio 54 have been lost.

I went there once when it was Xenon, circa 1981. Beautiful building. Sad that it is gone now. I remember the coat check girl was dressed in leopard skin.