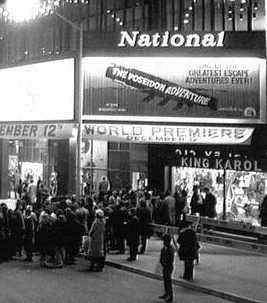 The National Theatre opened on December 12, 1972 with the World Premiere of Gene Hackman in “The Poseidon Adventure”, presented in 70mm. It was the first theatre built in Times Square in over thirty years. The theatre originally housed 1,445 seats, with 932 on the main level and 513 seats in the loge and mezzanine. Its marquee was one of the largest in New York City.

The National Theatre was twinned in 1982 with two distinct auditoriums created. After several changes in operators, the National Twin finally closed on January 22, 1998 with “For Richer or Poorer” and “Home Alone 3” as the final movies.

As part of the Disney revitalization of 42nd Street and Times Square, the theatre was gutted and became the new street view studios of ABC’s ‘Good Morning America’ program.

thanks for your reply. granted no one ever said the National either as a single or twin theater wasn’t successful. if you have a minute read the two previous posts i alluded to in my post of 5/22/12. doesn’t the sentiments expressed in these two posts make it seem certainly to some one you had never been to the National that the theater had gotten as seedy, run down, ill kept etc… as the general area itself? i just wanted to make the point to people who had never been to the National that in all the times i went there in its 26? year history regardless of the quality of the films the theater itself was always well run, well maintained etc….

this is of course the direct opposite of the Embassy 1,2,3. i admit i went to the tri-plexed former Demille a number of times simply because it was convenient. in fact the last film i saw there which was shortly before it closed up shop was “Living Out Loud” with Holly Hunter and Queen Latifah. my point being in the year or two before it closed both the main auditorium and the two upstairs were in run down condition. in fact the men’s room for the main auidtorium downstairs and the men’s room and the two upstairs were in decidedly un-mantained condition. i wonder how the theater was never closed for health code or building violations. the city closes eateries at the drop of a hat for the same reasons.

Say what you will about him, but Cineplex Odeon founder and theater-builder Garth Drabinsky was an old-school showman and kept his houses (for the most part) in tip-top shape.

You re-new a link by “subscribing” at the bottom of this page, not by merely posting a comment. Good luck.

If you look very closely, you can spot the marquee in the 1996 film “Joe’s Apartment”. I couldn’t make out either title on the marquee but one side was red and the other was black and blue (it could have been Bad Boys and Casper, but I don’t know).

I was twelve when my dad took me to see “Spies Like Us” at this theater. The movie was very funny, and still is to this day. I remember it played in the upstairs cinema that, I think, used to be the balcony before it was twinned. I didn’t see many films in Times Square as a kid because it wasn’t the cleanest or safest neighborhood, particularly at night. This was a fun theater to visit though. I also saw “Jo Jo Dancer: Your Life is Calling” and “Judgment Night” here.

I only saw The Black Hole here. Was disappointed in the screen size for such a large theater.

When SOM made its big return in 73 it played here and I was hoping it would return to the Rivoli as it had such a long initial engagement there and held the world premiere. I was too young to see it there its first go round. And as it was one of my favorite movie theaters it would have been great.

I saw FIREFOX, OCTOPUSSY and SPIES LIKE US here in 70MM after it was twinned. The twin was fine but I’m sorry I didn’t make it here when it was a single screen theatre.