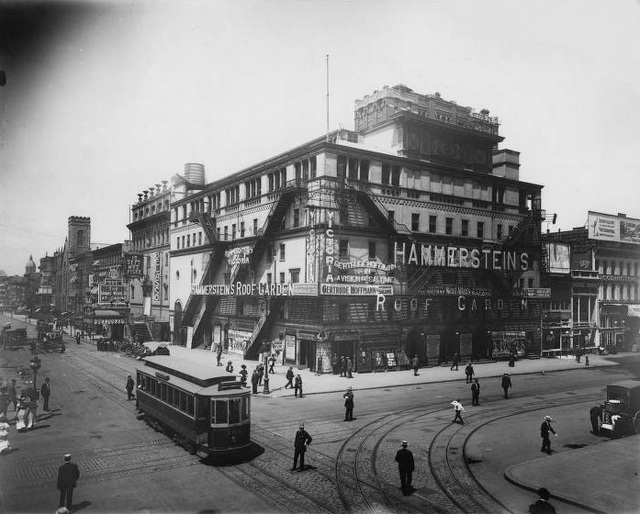 Thanks flyman!
I went to a few concerts there over the years and was always interested in it’s history. I figured it never showed film, as it’s not on this site. Anyone know of any photos online of the Manhattan Opera House, aka Hammerstein Ballroom?

Although I agree with Warren that this was hardly a cinema, the Hammerstein on 53rd street (Ed Sullivan) did premiere the classic Russian film ‘The End of St. Petersburg" in 1928.

If it was 1/3, I think a lot of theaters would have to be taken off the site. Especially now when as the buildings age, many of them have been used for retail, churches, etc, longer than they ever were used for movies.

Hammerstein’s Victoria figures prominently in the plot of David O. Selznick’s “Portrait of Jennie” and is referenced repeatedly there.

i love books about NYC theaters stage or film. one of my favorite’s is Mary C. Henderson’s “42 St.” the book contains 12 chapters or bios one might say for each of the theaters built on 42 st. between 7th and 8th Avenues. the 1st theater built on the block was the American which was on the southside closer to 8th in i believe 1895?

the chapter on the American begins with this statement-“the American has the dubious distinction of being the 1st theater built on the block and the first torn down”. to which i reacted ??????? the 2nd theater built on the block Hammerstein’s Victoria opened in 1899 and was torn down the end of 1915 to built the Rialto the 1st “movie palace” in Times Square which opened in 1916. now the American which was boarded up after a fire in 1930 wasn’t torn down until the spring of 1931 i believe. this being the case how can Henderson say the American was the 1st of the 12 theaters on the block torn down if the Victoria was torn at the end of 1915 a good 16 years before the American. this is where my question comes in.

there seems to be a wide range of opinions as to whether Hammerstein’s Victoria was a)completely torn down/demolished as we would use the term today or if it was b)simply gutted to the bare skeletal structure and the Rialto built within said skeletal frame. so which is it? if its b) that would certainly give some credence to Henderson’s statement about the American.

I would greatly appreciate it if anyone has additional info to answer my question of 9/3/12. thanks

You’ve had six years to find the answer; time’s up…

to Mike(saps) you have a point but I wouldn’t have asked the question again if someone had definitively answered it the 1st time I asked it- was Hammerstein’s Victoria “demolished” or not?